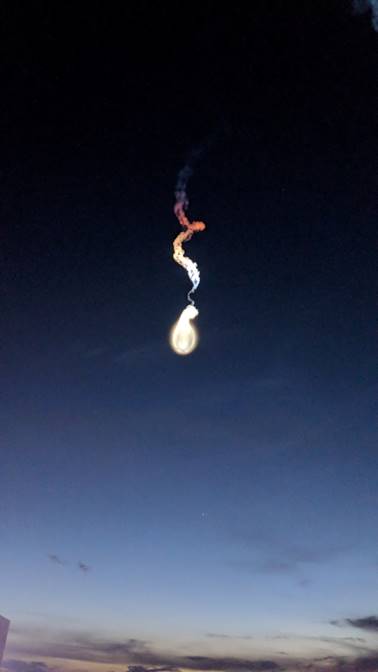 Sometimes, all of the stars line up. They did this morning as a SpaceX Falcon 9 rocket carried the CRS-15 payload into space. At first it seemed like a routine night launch with darkness prevailing, but then something wonderful happened. A few minutes after liftoff, the pre-dawn sunrise caught the smoky trail of the rocket as it lofted high above the Atlantic Ocean. Not only did a brightly colored trail emerge, but so did a rare event � the development of a bright white halo around the rocket. It started as a bright white teardrop, but then expanded to a large white circle with the rocket's second stage burn highly visible at its bottom. Indeed, the rocket was visible for over 8 minutes after launch, a very rare occurrence. This was the most spectacular unmanned launch I have ever seen in my 40 years covering the Cape. Thanks to SpaceX and NASA for the show! 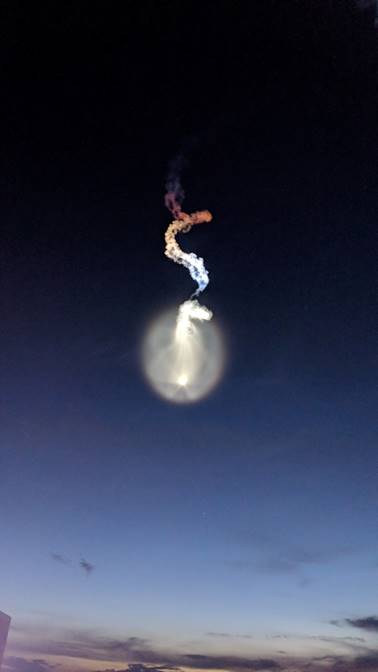 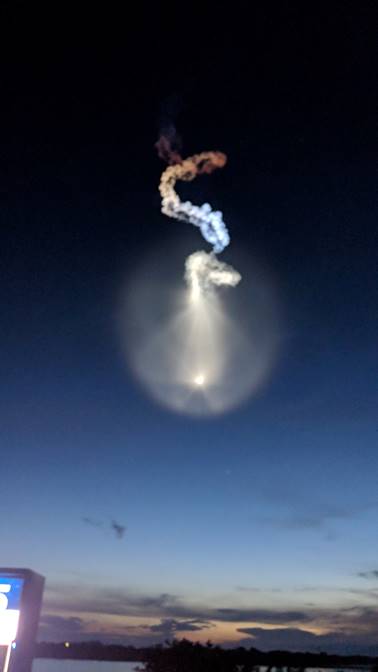 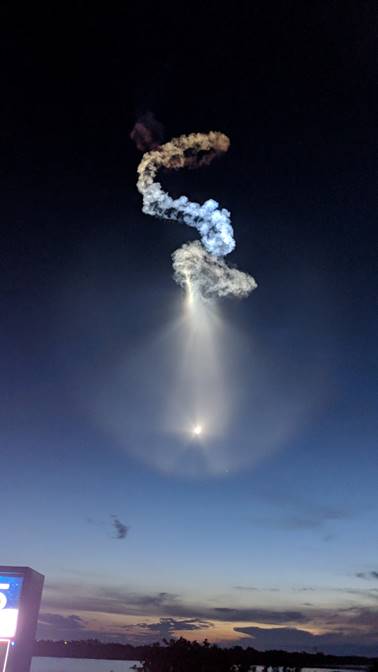 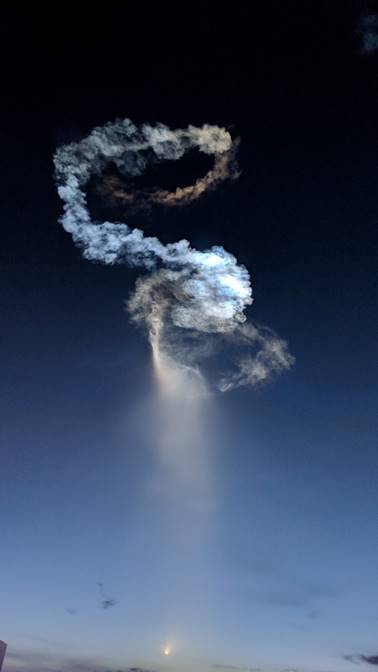 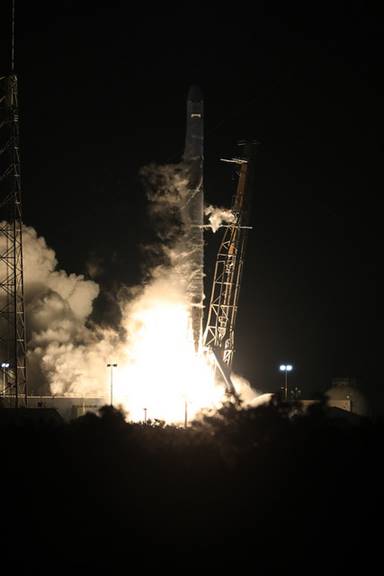 A SpaceX Falcon 9 rocket successfully launched the CRS-15 payload for NASA at 5:42 a.m. EDT today from Launch Pad 40 on Cape Canaveral Air Force Station. The CRS-15 payload consists of a SpaceX Dragon capsule carrying about 6,000 pounds of supplies and equipment bound for the International Space Station (ISS). The Dragon capsule was successfully deployed about 9.5 minutes after launch. Dragon is set to arrive at ISS on July 2. Two of the main elements of the Falcon 9 were flown previously. The first stage booster was flown on the NASA TESS mission in April, 2018 while the Dragon capsule was flown on the CRS-9 mission in July, 2016. The first stage booster flown today was not recovered as it had a design life of just two launches. The Dragon capsule will return to Earth carrying 4,000 pounds of cargo in a month. 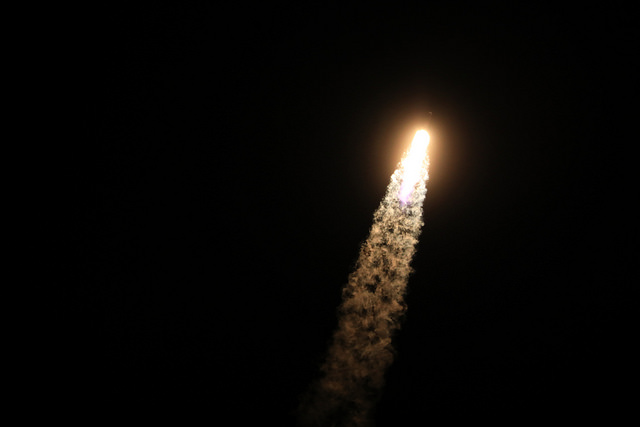 In addition to supplies and experiments, the Dragon capsule carries a new Canadian-built Latching End Effector (LEE). LEE will replace a failed unit astronauts removed from the Canadarm2 robotic arm in 2017. Each end of Canadarm2 has an identical LEE, used to grapple payloads and cargo spaceships and walk to various ISS locations. In collaboration with the National Park Service, a toy dog representing a Newfoundland that accompanied Lewis and Clark on their historic expedition is being flown to help NASA and the National Park Service celebrate two important anniversaries in 2018. The National Park Service commemorates 50 years since the beginning of the National Trail System in 1968 and NASA commemorates 60 years since the start of the space agency in 1958. 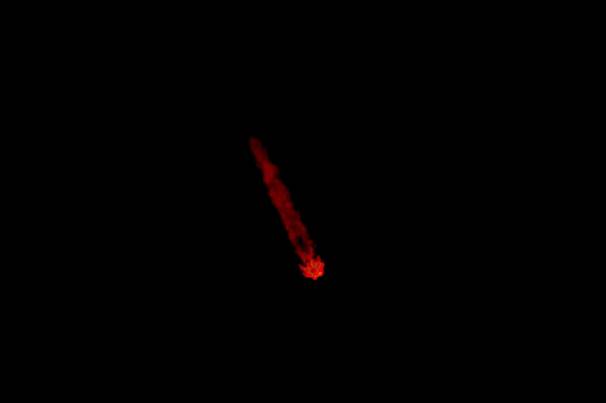 Veteran Cape photographer Lloyd Behrendt has released a stunning photo of Monday's Falcon 9 flight. Behrendt, who has photographed hundreds of launches at Cape Canaveral Air Force Station and the Kennedy Space Center, captured the photo below a few minutes after the launch of the Falcon 9, which was launched at 12:45 a.m. EDT Monday June 4 into crystal clear skies. The photo captures the Falcon 9 in flight just seconds before booster engine cutoff. The extreme color of the rocket's fiery trail and the distinctive "fan" of the rocket's nine first stage engines make this one of the most outstanding rocket photos we have ever seen. Behrendt and his business partner Liz Allen are contributing photographers for Spaceline. 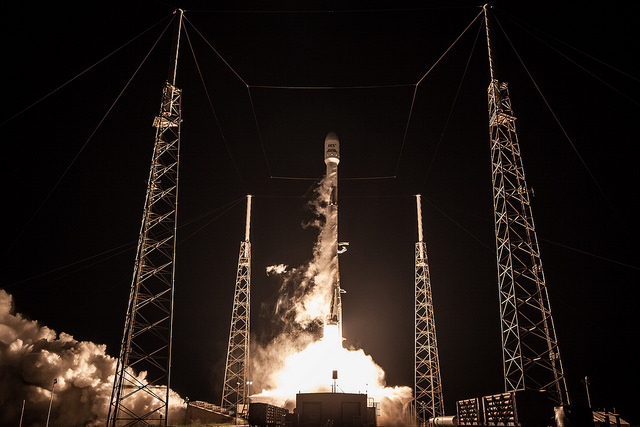 A SpaceX Falcon 9 rocket successfully launched the SES-12 commercial communications satellite at 12:45 a.m. EDT today from Launch Pad 40 on Cape Canaveral Air Force Station. Launch was originally scheduled for May 31 but was postponed to allow engineers time to troubleshoot a potential problem with the rocket's second stage. The Falcon 9 first stage booster was previously flown on the OTV-5 mission in September, 2017. An attempt to recover the booster today was not made, as it had a design life of two launches. Today's launch was flawless, and the SES-12 satellite was successfully deployed on a Geostationary Transfer Orbit (GTO) about 32 minutes after liftoff. 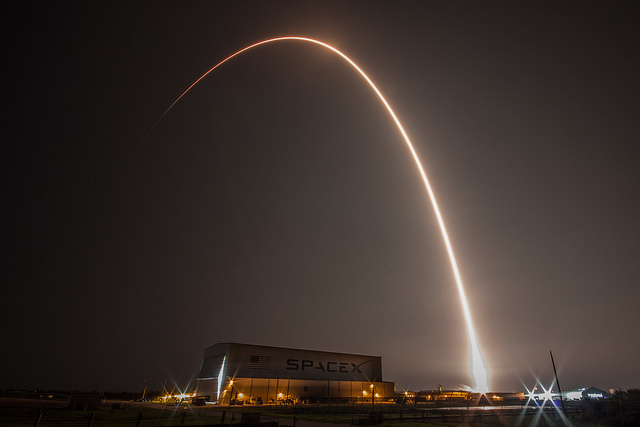 Owned and operated by Luxembourg-based SES, SES-12 will allow the company to provide high performance capacity, greater reliability and flexibility for video, data, mobility and government services to the Asia-Pacific and Middle East regions. Employing six wide beams and 72 high throughput user spot beams, SES-12 is one of the largest satellites owned by SES. The satellite also employs a Digital Transparent Processor to provide customizable bandwidth services to SES customers. The all-electric SES-12 satellite was built by Airbus Defense and Space, and employs electric propulsion for orbit raising and on-orbit maneuvers. The electric propulsion system dramatically reduced the weight of the satellite as it does not require fuel tanks and liquid fuel. Once operational, SES-12 has a design life of 15 years. 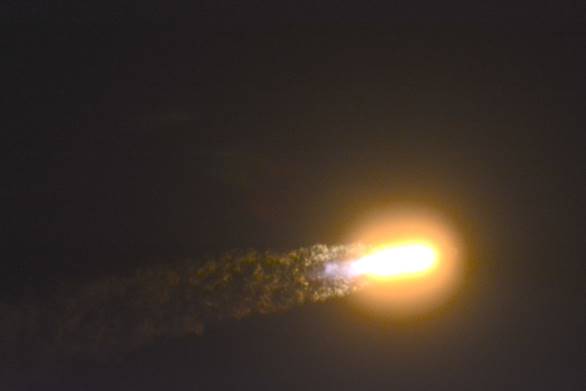