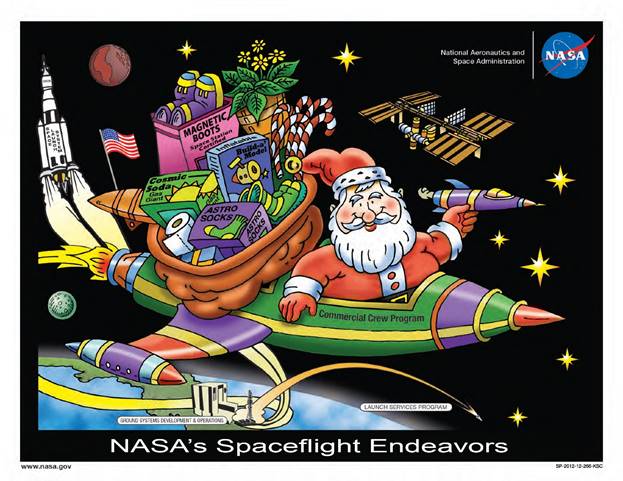 Christmas had been celebrated in space for many years now. Apollo 8, Skylab 4, STS-103 and crews aboard the International Space Station have all celebrated Christmas in space. Santa Claus actually visited Space Shuttle Discovery during STS-103, a Hubble Space Telescope servicing mission, on Christmas Eve, 1999. Mission controllers in Houston were stunned as Santa visited Discovery in the dead of night, delivering presents for the seven-member crew. 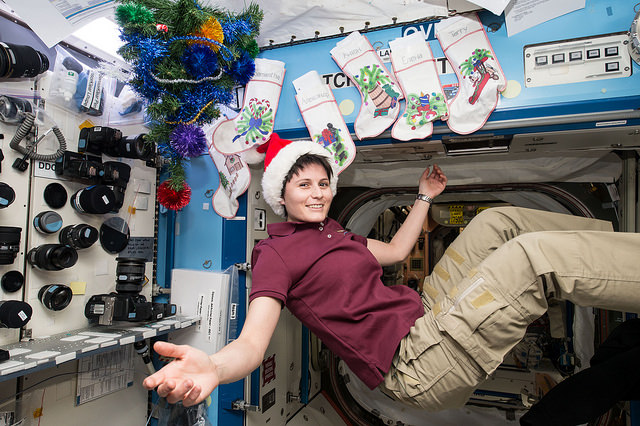 But for those of us who have been around for a while, the most memorable Christmas mission remains Apollo 8, mankind's first journey to the Moon and back. While Apollo 8 astronauts Frank Borman, James Lovell and William Anders orbited the Moon on Christmas Eve, 1968, they took time to read from the Bible's Book of Genesis Chapter 1, verses 1 through 10, King James version. The reading was included as part of a televised broadcast, which at the time was the most watched broadcast in television history. 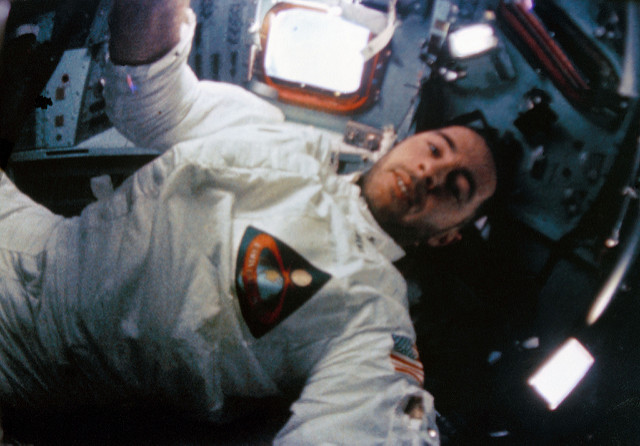 We are now approaching lunar sunrise, and for all the people back on Earth, the crew of Apollo 8 has a message that we would like to send to you. In the beginning, God created the heaven and the earth, and the earth was without form, and void; and darkness was upon the face of the deep. And the Spirit of God moved upon the face of the waters. And God said, Let there be light; and there was light. And God saw the light, that it was good; and God divided the light from the darkness. 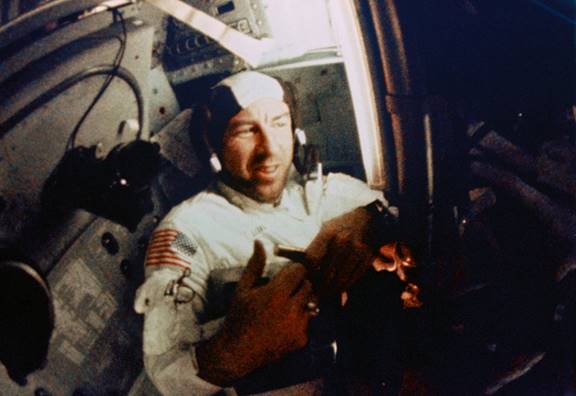 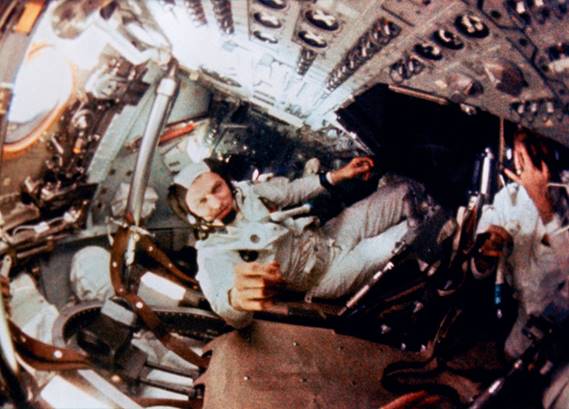 And God said, Let the waters under the heaven be gathered together unto one place, and let the dry land appear; and it was so. And God called the dry land Earth; and the gathering together of the waters called He seas; And God saw that it was good. And from the crew of Apollo 8, we close with good night, good luck, a Merry Christmas, and God bless all of you, all of you on the good Earth. 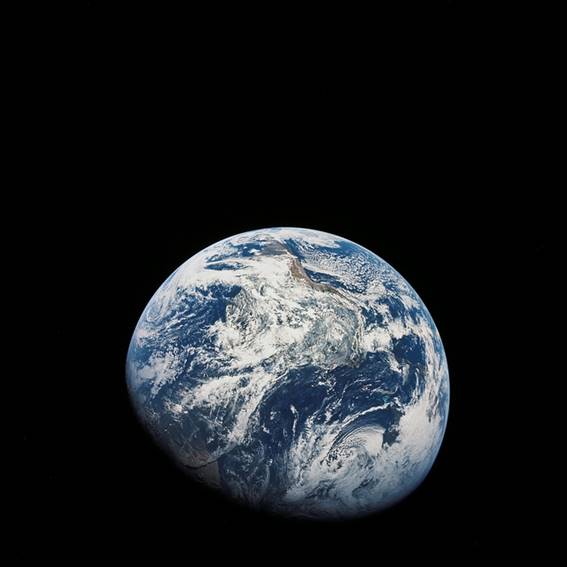 It was one of those really significant and memorable broadcasts in the history of the U.S. space program, not that secular concerns were ignored. On Christmas Day, 1968, the Apollo 8 crew performed a Trans-Earth Injection burn, which was conducted from the dark side of the Moon, out of reach of communication with Earth. Once voice contact was restored, astronaut James Lovell exclaimed, Please be informed, there IS a Santa Claus! Ken Mattingly, the Mission Control Capsule Communicator at the time, replied, That's affirmative, you are the best ones to know!

We hope this humble article brings back Christmas memories, or creates new ones. Merry Christmas from all of us here at Spaceline! 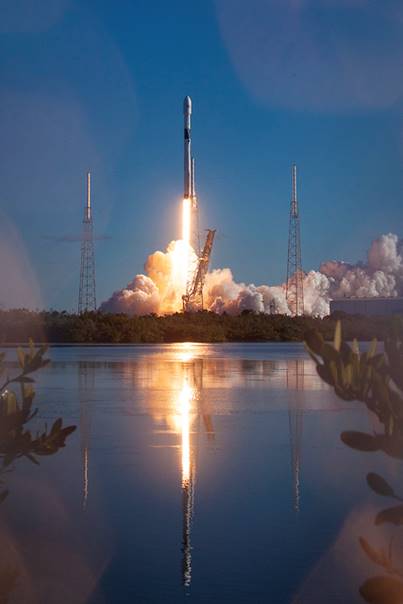 A SpaceX Falcon 9 rocket successfully launched the GPS III-SV01 satellite at 8:51 a.m. EST today from Launch Pad 40 on Cape Canaveral Air Force Station. Launch was delayed five days. A launch attempt on December 18 was scrubbed due to abnormal readings from a first stage sensor. Launch attempts on December 20 and December 22 were scrubbed due to unacceptable weather, because of stormy launch site weather and high winds aloft respectively. Today's launch occurred on time with no delays. In a departure from previous Falcon 9 launches, the first stage booster did not feature grid fins or landing legs and was not recovered. Mission requirements dictated that sufficient first stage booster fuel be kept on reserve in order to place the payload on its correct elliptical orbit, which did not allow enough fuel to support a landing. The satellite was successfully deployed about two hours after launch. 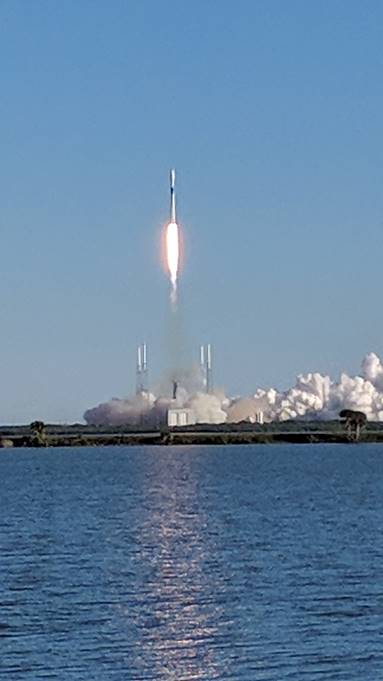 GPS III-SV01 (Global Positioning System III-Space Vehicle 01) is the first in a planned constellation of ten next generation GPS satellites. The GPS III series of satellites is intended to deliver sustained, reliable GPS capabilities to America's warfighters, U.S. allies and civilian users. GPS provides positioning, navigation and timing service to civilian and military users worldwide, with the goal of fulfilling increasing demands for the GPS system. System improvements introduced with the GPS III series include improved anti-jamming, improved accuracy and improved integrity. The satellites operate on six orbital planes at 55-degrees inclination at an altitude of about 12,000 miles. Design life is 15 years with 12 years mean mission duration. Launch weight of the satellite was about 8,000 pounds. Position accuracy is within 0.63 meters. Prime contractor for GPS III-SV01 is Lockheed Martin. 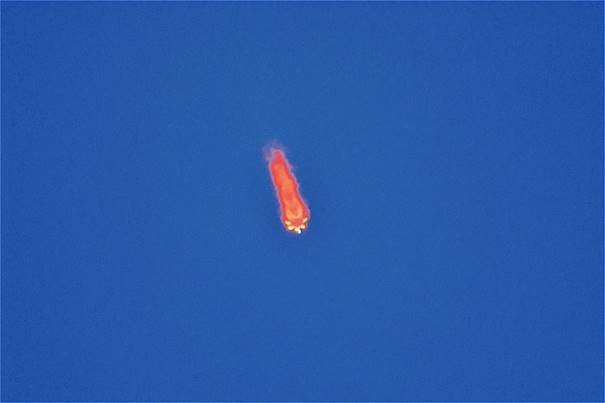 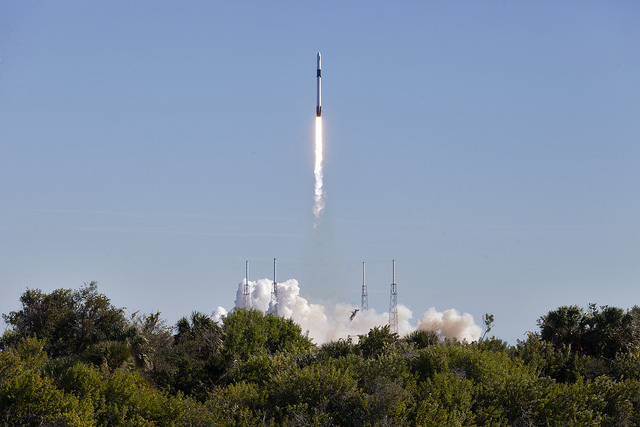 A SpaceX Falcon 9 rocket successfully launched the CRS-16 payload for NASA at 1:16 p.m. EST today from Launch Pad 40 on Cape Canaveral Air Force Station. Launch was delayed one day to allow contaminated rodent food aboard the payload to be replaced. The Dragon spacecraft that supports CRS-16 has flown once before, on the CRS-10 mission in February, 2017. CRS-16 was deployed about ten minutes after launch and will dock to the International Space Station on Saturday, December 8. Today's launch was marred only by a "non-nominal" recovery of the Falcon 9 first stage booster. The booster was intended to land at Landing Zone 1 on Cape Canaveral Air Force Station, but its grid fin hydraulic pump stalled and the booster made a water landing just offshore of the Cape instead. The booster was recovered intact and is apparently in excellent condition despite the mishap. 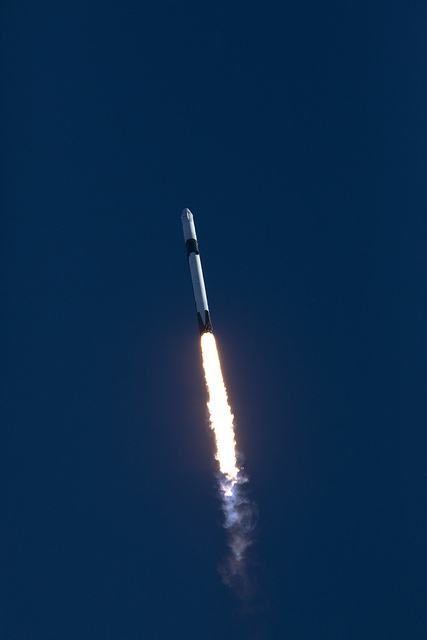 The CRS-16 Dragon Capsule is loaded with over 5,600 pounds of supplies and equipment in support of over 250 science and research investigations conducted aboard the International Space Station (ISS). This is the sixteenth of up to 20 missions SpaceX will conduct to ISS under their first Commercial Resupply Services (CRS) contract with NASA. In January, 2016 NASA announced that SpaceX will support multiple CRS missions to resupply ISS through at least 2024 as part of a second contract award. Under the CRS contracts, SpaceX is able to provide the United States capability to deliver and return significant amounts of ISS cargo, including live plants and animals. An important variant of the Dragon spacecraft, named Crew Dragon, is under development and is intended to carry manned crews to and from ISS. As for CRS-16, Dragon will remain at ISS for about five weeks before being recovered in the Pacific Ocean carrying about 4,000 pounds of return cargo. 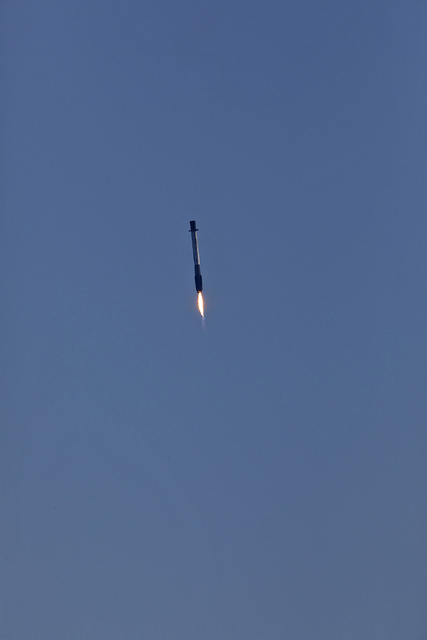