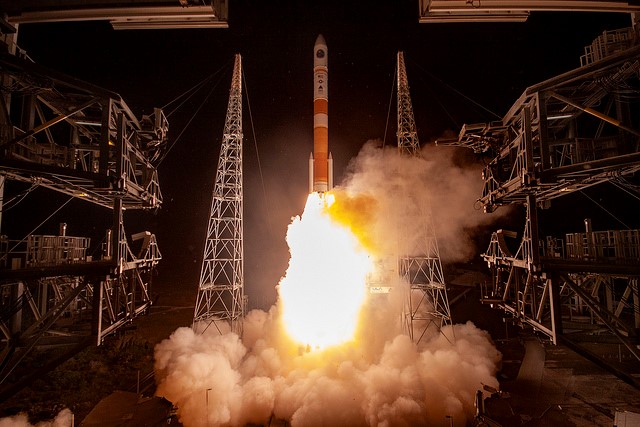 A United Launch Alliance Delta IV rocket successfully launched the WGS-10 satellite for the Air Force at 8:26 p.m. EDT today from Launch Pad 37B on Cape Canaveral Air Force Station. Launch was originally scheduled for March 13, 2019 but was postponed to allow troubleshooting of a technical issue with the rocket. Today's launch was scheduled for 6:56 p.m. EDT but slipped to 7:11 p.m. EDT due to delays in pre-launch processing. Launch was further delayed to 7:52 p.m. EDT as engineers tackled technical issues with the rocket's first and second stages. Launch was postponed to 8:26 p.m. EDT as problems with the NASA Tracking and Data Relay Satellite (TDRS) system were resolved. The TDRS system is required in order to provide telemetry support and ascent data from the Delta IV after it is launched. 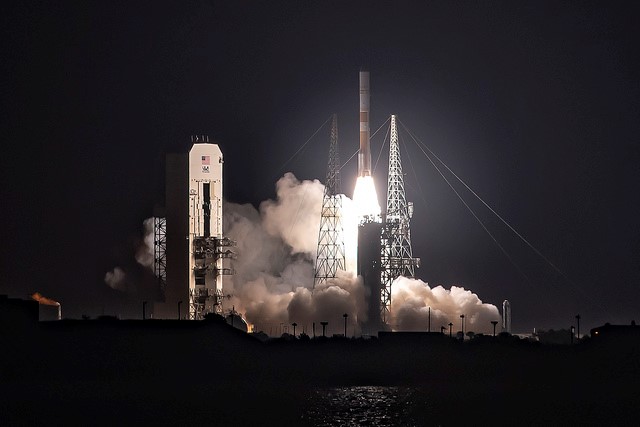 The Delta IV rocket launched today was the 5,4 version, featuring a five-meter payload fairing and four solid rocket boosters. The first stage produced a liftoff thrust of about 705,000 pounds, augmented by a thrust of about 281,000 pounds from each solid rocket booster. The 13,200-pound WGS-10 satellite was successfully deployed about 36 minutes after launch. The satellite is currently on its way to geostationary orbit about 22,000 miles above Earth. 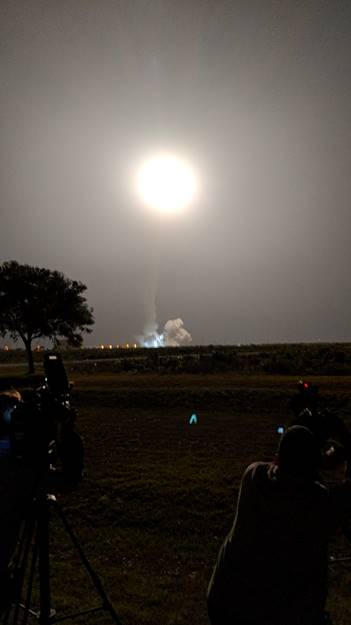 WGS-10 is the tenth satellite in the Air Force Wideband Global SATCOM (WGS) constellation. As the backbone of the U.S. military's global satellite communications, WGS provides flexible, high-capacity communications for the nation's warfighters, including marines, soldiers, sailors, airmen, the White House Communications Agency, the U.S. State Department, international partners and other special users. The WGS system is composed of three principal segments. These are the Space Segment (satellites), the Control Segment (operators) and Terminal Segment (users). 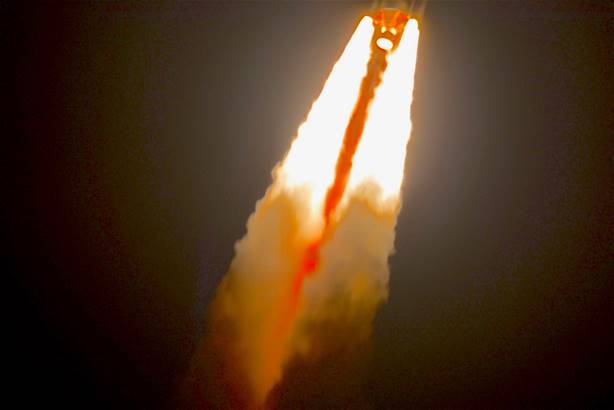 The WGS satellites are the Department of Defense's highest capacity communications satellites. Each satellite provides service in the X and Ka frequency bands, with the ability to switch back and forth from these bands as needed. Each satellite is digitally channelized and transponded. These characteristics provide a described "quantum leap" in communications capacity, connectivity and flexibility for WGS users. Just one WGS satellite provides more capacity than the entire Defense Satellite Communications System (DSCS) constellation, which WGS is augmenting and ultimately replacing. WGS satellites are manufactured by Boeing Defense, Space and Security corporation. 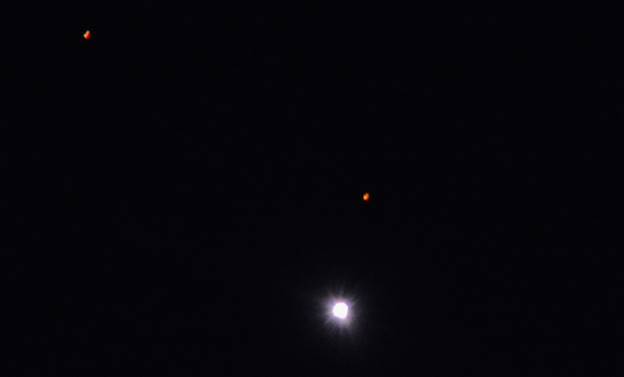 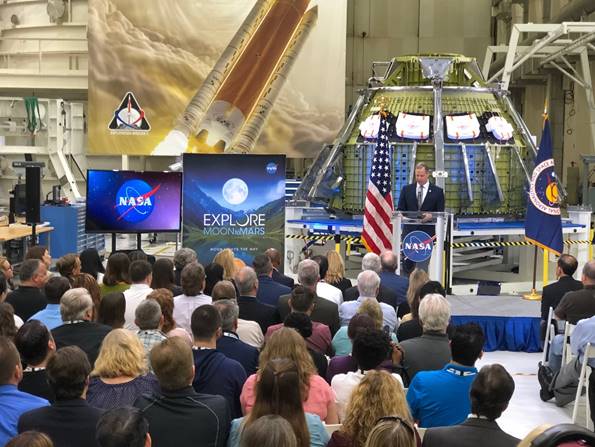 NASA Administrator Jim Bridenstine visited the Kennedy Space Center (KSC) today to update employees, dignitaries and journalists on the space agency's short-term and long-term plans to return to the Moon and journey to Mars. At what was termed the "Moon To Mars" seminar, Bridenstine spoke about the recently-released 2020 federal budget, in which the Trump Administration proposes $21 billion for NASA. Bridenstine said that the budget will allow NASA to continue to pursue its plans for a vigorous "Moon To Mars" exploration program, assuring a continuing American presence in space, using a permanent settlement on the Moon as a first step to Mars. Bridenstine said, "This budget will build on our successes in low-Earth orbit to create a sustainable exploration campaign that � will continue ushering in a new era of human spaceflight as we launch American astronauts, on American rockets, from American soil, for the first time since 2011. The Space Launch System, Orion spacecraft, and Gateway will continue to be our backbone for deep space exploration." 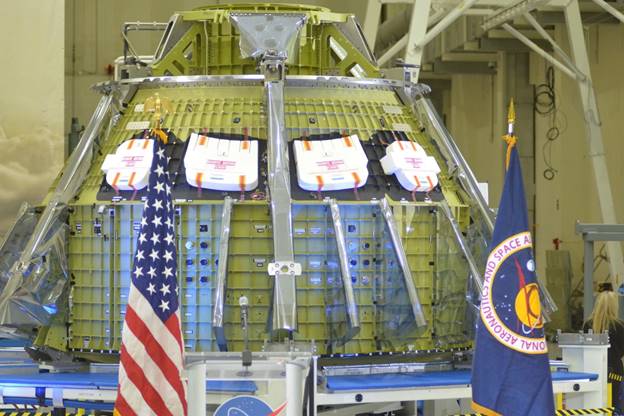 Bridenstine encouraged his troops with a story about a chat he had with a KSC visitor who was staying at his hotel. "She ran into somebody at the Kennedy Space Center and she asked him what he did, and he said, 'Well, I'm helping us to go to the Moon and Mars'". She said, "Okay, well what do you do?" And he said, "I'm a custodian." It was Bridenstine's way of underscoring the commitment of everyone at NASA to help the United States establish a permanent outpost on the Moon as a stepping stone to the Universe, beginning with a Mars mission, not just those employees working on Orion and the Space Launch System (SLS). Bridenstine said this year's budget reaffirms a commitment to the SLS, the Webb Telescope, Orion, Exploration Mission-2 (the first crewed NASA space vehicle since the Space Shuttle), and a small space/transfer station called Gateway, which will orbit the moon by the mid-2020's. Gateway would be the means to deliver payloads, ferried up from Earth, to the Moon's surface. Plans are to return Americans to the Moon by 2028, with a permanent base to follow. That lunar base would be a stepping off point for travel to Mars. This was welcome news to the "Moon To Mars" audience, especially KSC employees, who have been suffering from a recession following the retirement of the Space Shuttle in 2011. The future is bright, as was beautifully exemplified in today's seminar. 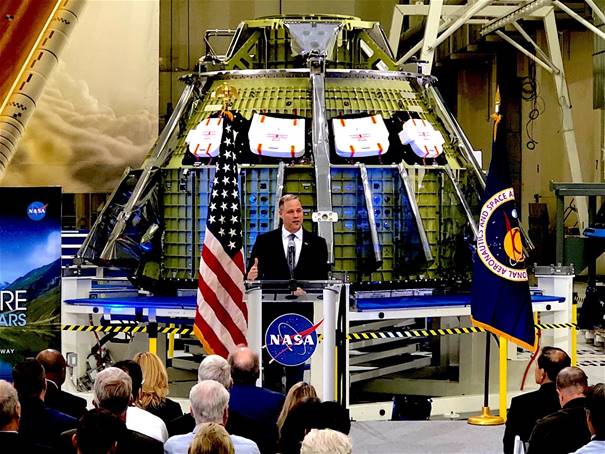 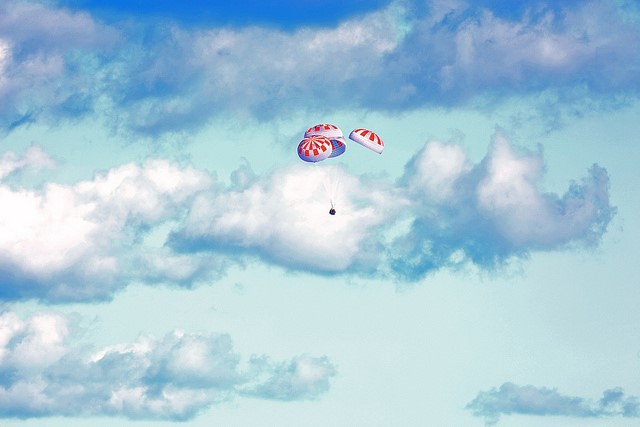 An unmanned SpaceX Crew Dragon space capsule successfully completed a six-day mission to the International Space Station (ISS) with a splashdown on the Atlantic Ocean about 230 miles east of Cape Canaveral on-time at 8:45 a.m. EST today. Splashdown occurred about six hours after the spacecraft made an autonomous undocking from ISS. Crew Dragon was quickly recovered by a brand new SpaceX recovery vessel. This marks a major milestone for SpaceX and NASA, as the successful mission paves the way for manned spaceflights aboard the Crew Dragon, which could occur as early as July, 2019. The Crew Dragon Demo-1 flight, launched from the Kennedy Space Center on March 2, 2019, achieved several important firsts. These include the first commercially built and operated American crew-rated spacecraft to visit ISS, the first autonomous docking and undocking of an American spacecraft to and from ISS and the first use of a new, global design standard for the adapters that connect ISS and Crew Dragon which will also be used for the future NASA Orion spacecraft on its mission to the Moon. This was an exciting mission for SpaceX and NASA, as the space agency seeks to begin the first manned spaceflights from U.S. soil since the retirement of the Space Shuttle in 2011. 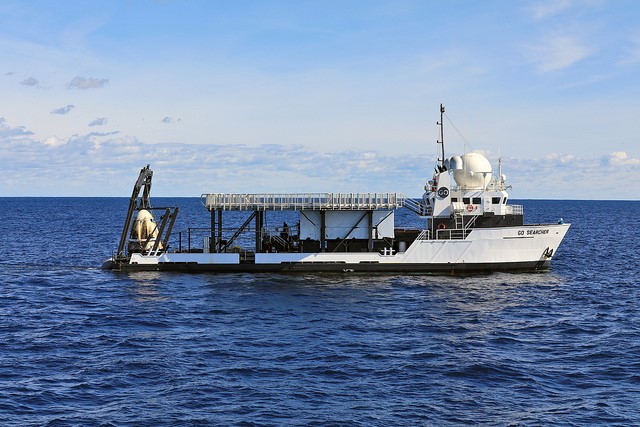 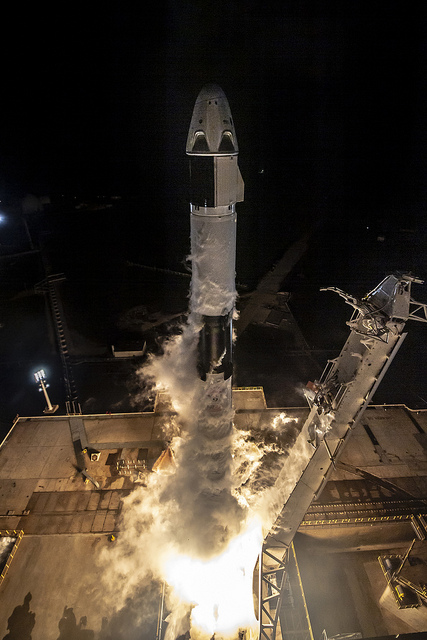 A SpaceX Falcon 9 rocket successfully launched the Crew Dragon Demo-1 mission at 2:49 a.m. EST today from Launch Pad 39A at the Kennedy Space Center. The unmanned Crew Dragon spacecraft was deployed on an International Space Station (ISS) transfer orbit about 11 minutes after launch. The Falcon 9 first stage booster employed today was being flown for the first time and was successfully recovered on the "Of Course I Still Love You" drone ship positioned about 300 miles east of Cape Canaveral on the Atlantic Ocean. The spacecraft, being flown for the first time for the NASA Commercial Crew Program, is scheduled to dock with ISS on Sunday, March 3 at about 6:00 a.m. EST after performing a series of phasing maneuvers. In a departure from the cargo-carrying Dragon capsule which is grappled and berthed to ISS, Crew Dragon will autonomously dock with ISS on a port last used for the docking of Space Shuttle Atlantis during mission STS-135 in July, 2011. Although uncrewed, Crew Dragon carries about 400 pounds of crew supplies and equipment. 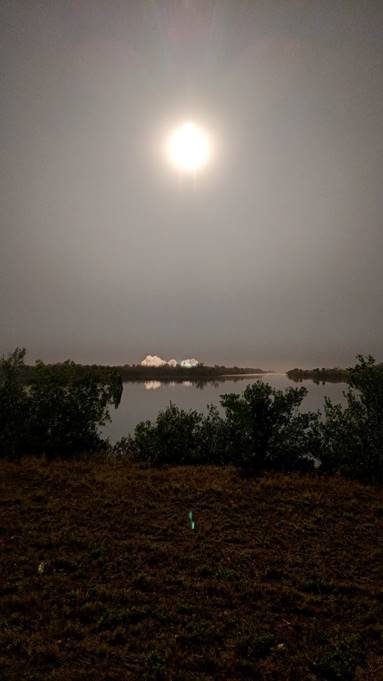 Crew Dragon will remain docked to ISS for five days. The spacecraft will autonomously undock from ISS at about 2:30 a.m. EST on Friday, March 8. About five hours after Crew Dragon departs ISS, it will conduct its deorbit burn which will last about 15 minutes. It will take about 40 minutes for Crew Dragon to return to Earth. It will splash down in the Atlantic Ocean at about 8:45 a.m. EST. Crew Dragon will employ an enhanced four-parachute system to touch down gently and be recovered by a brand new recovery ship. SpaceX has been tasked by NASA to recover the spacecraft and its crew not more than one hour after splashdown. The entire mission, from pre-launch to recovery, is being managed by SpaceX flight controllers, with oversight by NASA.

The mission, officially named Crew Dragon Demo-1, is an important pre-cursor to the resumption of manned spaceflights launching from U.S. soil since the retirement of the Space Shuttle in 2011. Specific mission objectives include the demonstration of on-orbit applications of the spacecraft's avionics system, docking system, communications/telemetry system, environmental control systems, solar array electrical systems and propulsion systems. Objectives also include demonstrating the performance of the guidance, navigation and control systems of both the Falcon 9 rocket and Crew Dragon spacecraft through ascent, on-orbit operations and re-entry. The demonstration flight will also measure acoustic and vibration levels and loads across the Crew Dragon interior and exterior which may affect its eventual astronaut occupants. The flight will also demonstrate the launch escape system trigger monitoring system. Crew Dragon performance from the beginning to end of the mission will be strictly evaluated by SpaceX and NASA. All of the mission data will serve to confirm that Crew Dragon can carry out its designed objective to ferry astronaut crews to and from ISS. If all goes well, there could be a launch of astronauts aboard Crew Dragon as early as July, 2019. A brief overview of the NASA Commercial Crew Program, soon to be available at www.spaceline.org, follows. 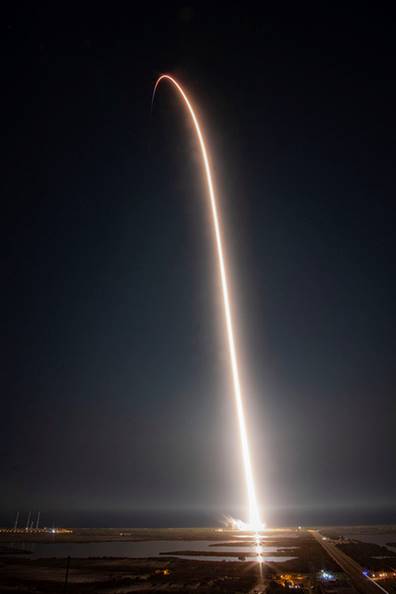 The NASA Commercial Crew Program is designed to employ commercial contractors to provide astronaut ferrying services to and from the International Space Station. It began as the Commercial Crew Development Program, in which two prime contractors, SpaceX and Boeing, were contracted by NASA to provide these services. The SpaceX vehicle originated as the Crew Dragon, while the Boeing vehicle originated as the CST-100 Starliner. 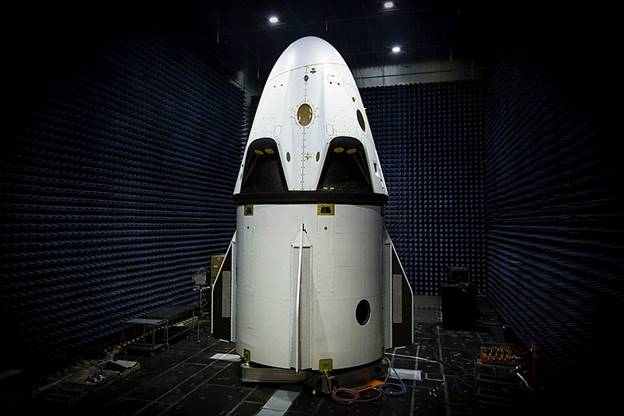 Crew Dragon, also known as Dragon Rider, Dragon V2 or Dragon 2, is the second version of the SpaceX Dragon family of space capsules. It is a human rated vehicle and incorporates a set of four side-mounted thruster pods, each having two Super Draco engines. These could be employed in an in-flight emergency to carry the spacecraft to a safe distance away from the booster rocket. Crew Dragon can fly atop Falcon 9 rockets. It features larger windows, new flight computers and avionics and redesigned solar arrays over that of the previous unmanned Dragon capsule. In September, 2014, NASA officially selected Crew Dragon to carry astronauts to and from ISS as part of the Commercial Crew Program contract. 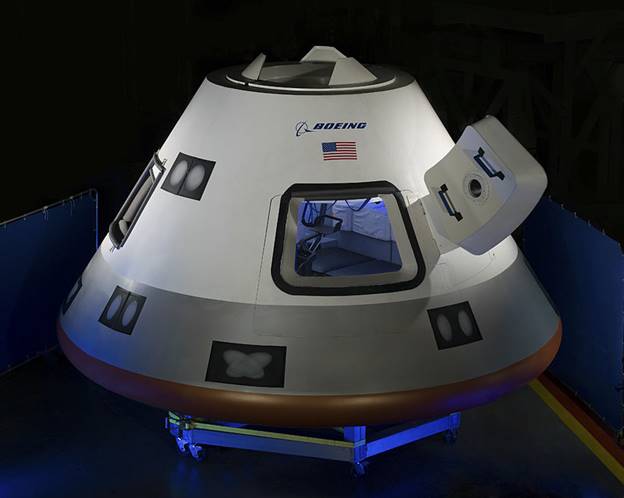 The Crew Space Transportation (CST)-100 Starliner is Boeing's entry into the NASA Commercial Crew Program, intended to ferry astronauts to and from the International Space Station. CST-100 Starliner is similar, but not identical to, the NASA Orion Spacecraft under development by Lockheed Martin. It is approximately the same size as the Apollo Command Module and is designed to be flown atop Atlas V, Delta IV, Falcon 9 and Vulcan rockets. NASA selected CST-100 Starliner to be an official finalist in the Commercial Crew Program in September, 2014. One of the interesting features in the CST-100 Starliner contract in particular is the fact that Boeing will be able to sell seats to commercial space tourists once operational.