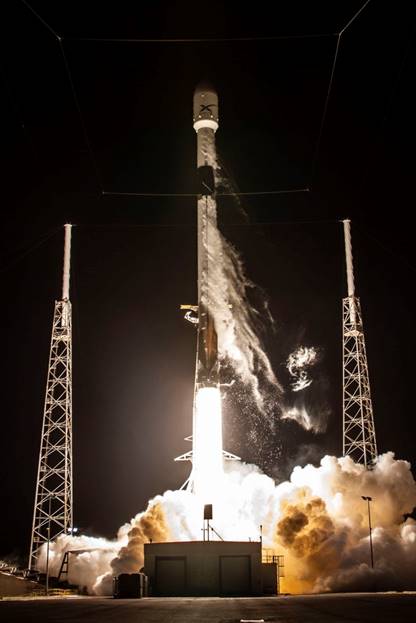 A SpaceX Falcon 9 rocket successfully launched 60 Starlink broadband satellites at 10:30 p.m. EDT today from Launch Pad 40 on Cape Canaveral Air Force Station. Launch was originally scheduled for May 15, 2019 but was scrubbed due to out of limits high altitude winds. A follow-up launch attempt on May 16, 2019 was postponed to allow software updates to the 60-satellite Starlink payload. Today's launch occurred on time with no delays. The Falcon 9 first stage booster employed in today's launch was being flown for the third time. It first supported the Telstar-18 Vantage launch in September, 2018 and then the Iridium-8 launch in January, 2019. The booster was successfully recovered with a landing on the "Of Course I Still Love You" drone ship deployed on the Atlantic Ocean about 400 miles northeast of Cape Canaveral. The Starlink payload was successfully placed in orbit beginning about 62 minutes after launch. The 60 satellites, designated Starlink-1, began deployment at an altitude of about 440 kilometers and using on-board propulsion they will ultimately reach an operational altitude of about 550 kilometers. The Starlink satellite constellation, developed and operated by SpaceX, is intended to connect end users with low latency, high bandwidth broadband services, providing continual coverage around the globe using several thousand satellites in low-Earth orbit. SpaceX hopes to have up to 720 Starlink satellites in orbit within the next year. Each Starlink satellite features a simplified, compact design, providing smooth manufacturing and deployment capabilities. With a flat-panel design featuring multiple high-throughput antennas and a single solar array, each Starlink satellite weighs about 600 pounds. At a total weight of over 30,000 pounds, today's payload represented the heaviest payload ever launched by SpaceX. To adjust position in orbit, each satellite features a Hall thruster powered by krypton. The satellites employ a Startracker navigation system that allows SpaceX to orient them with extreme precision. The Starlink satellites are also capable of tracking on-orbit debris and autonomously avoid collisions. The satellites are designed to easily burn up in Earth's atmosphere at the conclusion of their operational life. To quote a media release from SpaceX, "This mission will push the operational capabilities of the satellites to the limit. SpaceX expects to encounter issues along the way, but our learnings here are key to developing an affordable and reliable broadband service in the future." The target date for the next Starlink launch has yet to be announced. NASA Administrator Jim Bridenstine spoke to faculty, students, dignitaries and the news media today at Florida Tech in Melbourne, Florida. Bridenstine outlined the steps NASA is taking in order to put astronauts back on the Moon by 2024. The government/commercial partnership will be under the Artemis (twin sister of Apollo) program designation and will feature the first female astronaut on the Moon. Central to the program is the proposed Artemis Gateway, a multi-purpose lunar orbiting space station which will facilitate both manned and unmanned missions to the lunar surface. 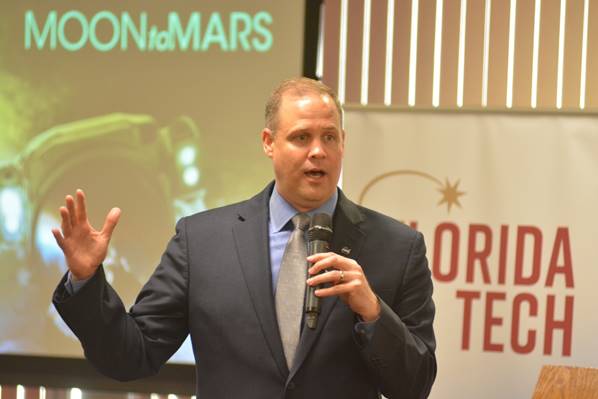 Bridenstine's speech coincided with a major announcement by NASA that the space agency has awarded Maxar Technologies, formerly SSL, a contract to develop and demonstrate power, propulsion and communications capabilities for the lunar Gateway. Bridenstine said, "The power and propulsion element is the foundation of Gateway and a fine example of how partnerships with U.S. companies can help expedite NASA's return to the Moon with the first woman and next man by 2024. It will be the key component upon which we will build our lunar Gateway outpost, the cornerstone of NASA's sustainable and reusable Artemis exploration architecture on and around the Moon." 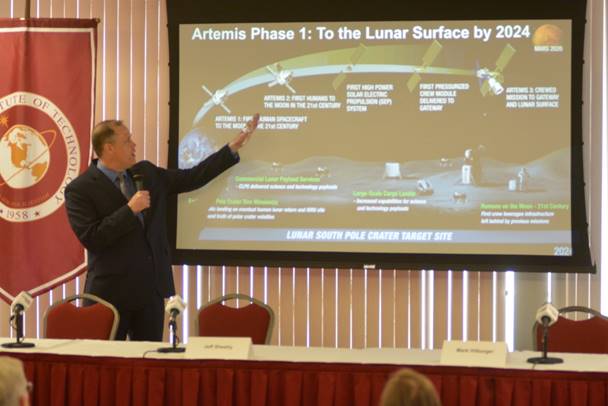 The power and propulsion element is a high-power, 50-kilowatt solar electric propulsion spacecraft, three times more powerful than existing capabilities. As a mobile command and service module, Gateway will provide a communications relay for human and robotic expeditions to the lunar surface, starting at the Moon's South Pole where there are multiple millions of pounds of water ice which can provide ample hydrogen and oxygen resources for a sustained presence on the Moon. 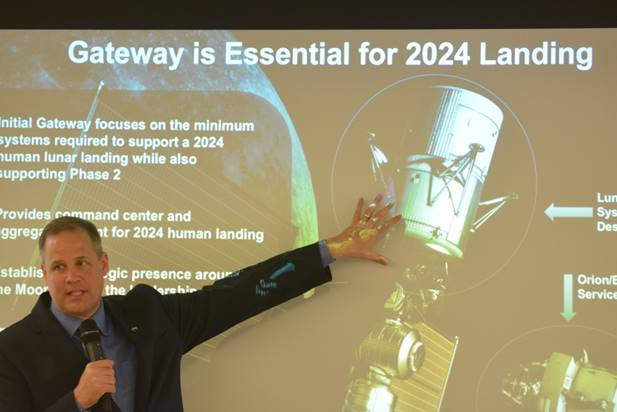 "We're excited to demonstrate our newest technology on the power and propulsion element. Solar electric propulsion is extremely efficient, making it perfect for the Gateway. This system requires much less propellant than traditional chemical systems, which will allow the Gateway to move more mass around the Moon, like a human landing system and large modules for living and working in orbit," said Mike Barrett, power and propulsion element project manager at NASA's Glenn Research Center in Cleveland, Ohio. Charged with returning to the Moon within five years, NASA's lunar exploration plans are based on a two-phase approach: the first is focused on speed, landing on the Moon by 2024 while the second is to establish a sustained presence on and around the Moon by 2028. This will be the major stepping stone for preparing to send astronauts to Mars. 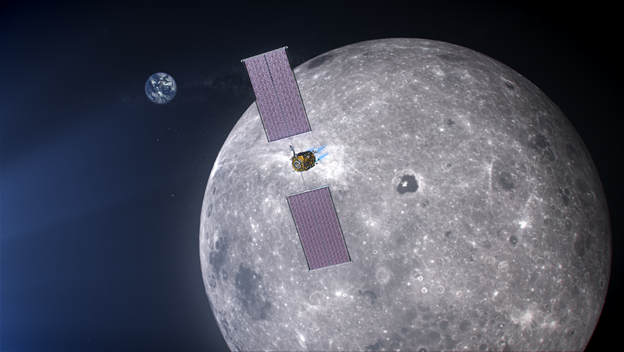 Tonight's scheduled launch of a SpaceX Falcon 9 rocket on the Starlink-1 mission has been scrubbed for the second time in two days. No specific reason for the scrub was announced, however SpaceX made the following statement via Twitter: "Standing down to update satellite software and triple-check everything again. Always want to do everything we can on the ground to maximize mission success. Next launch opportunity in about a week." As per this statement, a new specific launch date has yet to be announced. Launch was originally scheduled for May 15, 2019 but was scrubbed due to high altitude winds which were beyond allowable limits. The rocket will carry 60 satellites in the Starlink constellation, a SpaceX broadband Internet service which may one day employ several thousand satellites. Launch will be from Launch Pad 40 on Cape Canaveral Air Force Station. Tonight's scheduled launch of a SpaceX Falcon 9 rocket on the Starlink-1 mission has been scrubbed due to unacceptable high altitude winds. The rocket is carrying 60 broadband satellites built and operated by SpaceX as part of a planned constellation which may ultimately contain several thousand similar satellites. Launch will occur from Launch Pad 40 on Cape Canaveral Air Force Station. Launch has been rescheduled for Thursday, May 16 at 10:30 p.m. EDT. The launch window extends to 12:00 midnight EDT. There is an 80% chance for favorable weather during Thursday's launch window and high altitude winds are expected to improve significantly. A SpaceX Falcon 9 rocket successfully launched the CRS-17 payload for NASA at 2:48 a.m. EDT today from Launch Pad 40 on Cape Canaveral Air Force Station. Launch was scheduled for May 1, 2019 but was postponed to allow troubleshooting of an electrical problem on the International Space Station (ISS). A launch attempt on May 3, 2019 was scrubbed due to an electrical problem on the "Of Course I Still Love You" drone ship as well as a helium leak on the rocket's second stage. CRS-17 consists of a Dragon space capsule to be flown to ISS. The Dragon capsule flown today flew previously on the CRS-12 mission and the first stage booster flown today was being used for the first time. It successfully landed on the drone ship which was positioned about 12 miles east of Cape Canaveral on the Atlantic Ocean. Boosters flown in today's flight profile would normally be recovered on land at the Cape Landing Zone 1, but that site was unavailable due to forensic work ongoing there to determine what caused the destruction of a Crew Dragon space capsule during a routine test firing on April 20, 2019. Dragon will take two days to arrive at ISS. When it arrives, astronaut David Saint-Jacques of the Canadian Space Agency will grapple the spacecraft, with NASA astronaut Nick Hague serving as backup. NASA astronaut Christina Koch will assist by monitoring telemetry during Dragon's approach. The ISS crew will monitor Dragon functions during rendezvous. After Dragon capture, mission control in Houston will send commands to the ISS robotic arm to rotate and install the spacecraft on the bottom of the ISS Harmony module. The mission is being performed under the NASA Commercial Resupply Services contract. The Dragon spacecraft will deliver about 6,000 pounds of supplies and equipment to support dozens of the more than 250 scientific and research investigations currently ongoing aboard ISS. CRS-17 main payloads include the Orbiting Carbon Observatory-3 (OCO-3) and Space Test Program-Houston-6 (STP-H6). OCO-3 will be installed robotically on the exterior of the ISS Japanese Experiment Module Exposed Facility Unit, where it will measure and map carbon dioxide from space to increase our understanding of the relationship between carbon dioxide and climate. STP-H6 in an X-ray communication investigation that will be used to perform a space-based demonstration of a new technology for generating beams of modulated X-rays. This technology may become useful for providing efficient communication to deep space probes, or possibly enhancing communication with hypersonic vehicles where plasma sheaths prevent traditional radio communications.