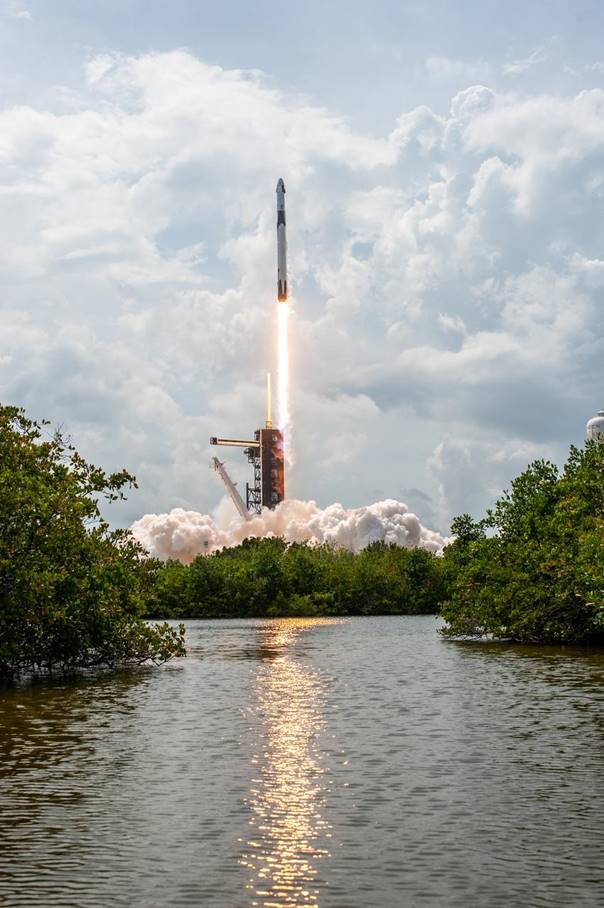 It was one of those historic moments that will be etched in the memory of the U.S. space program for years to come. A SpaceX Falcon 9 rocket successfully launched a Crew Dragon spacecraft carrying astronauts Bob Behnken and Doug Hurley at 3:22 p.m. EDT today from Launch Pad 39A at the Kennedy Space Center. Launch was originally set for May 27 but was postponed due to bad weather. This was the first manned launch from U.S. soil since the Space Shuttle was retired in July, 2011 and the first time U.S. astronauts were launched aboard a commercial rocket and spacecraft. The mission, Crew Dragon Demo-2, will be the final Crew Dragon test flight prior to regularly scheduled astronaut crew flights to and from the International Space Station under the NASA Commercial Crew Program contract with SpaceX. It will provide critical data on the performance of the Falcon 9 rocket, Crew Dragon spacecraft, ground support systems as well as on-orbit operations, docking and landing operations. 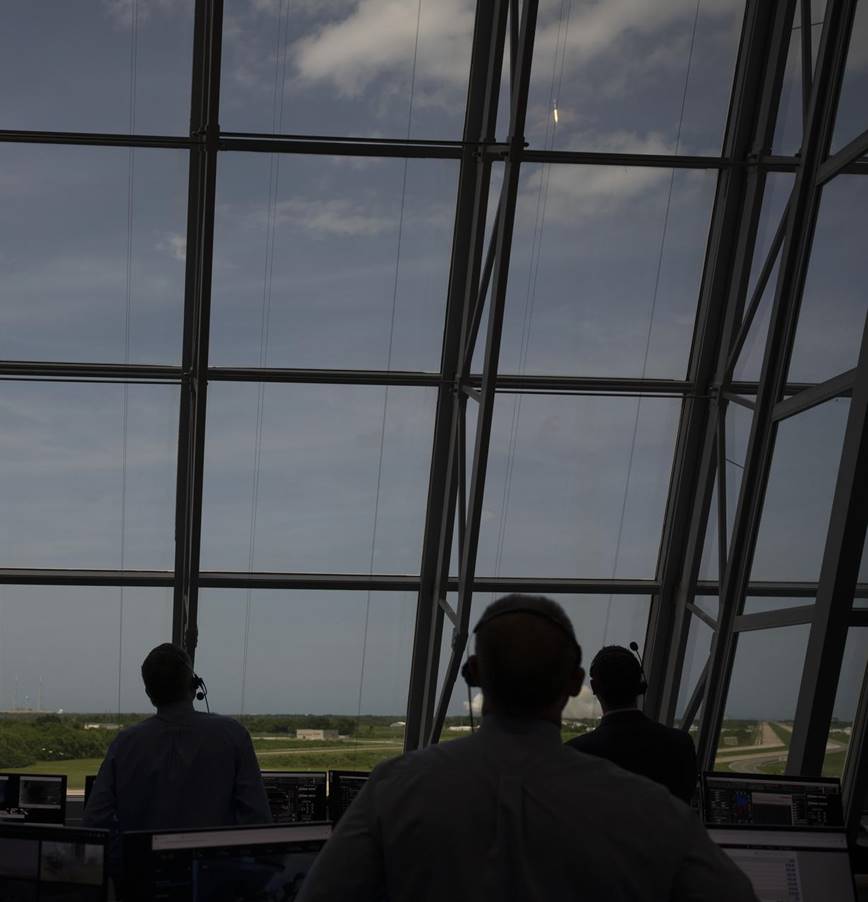 The Crew Dragon spacecraft is 13 feet in diameter and 26.7 feet in height. It weighs 13,228 pounds at launch and 6,614 pounds upon return to Earth. It is capable of carrying up to seven people into space. Crew Dragon has a trunk at its base for support and the carriage of equipment and is jettisoned just prior to the return to Earth. The space suits worn by the astronauts are far more comfortable and less bulky than those employed in previous manned space flights. The suits were designed and manufactured by SpaceX. They are designed to provide pressurization and temperature control for the astronauts during flight. Features of the spacesuits include a 3D printed helmet, touchscreen compatible gloves, flame resistant outer layer and hearing protection. 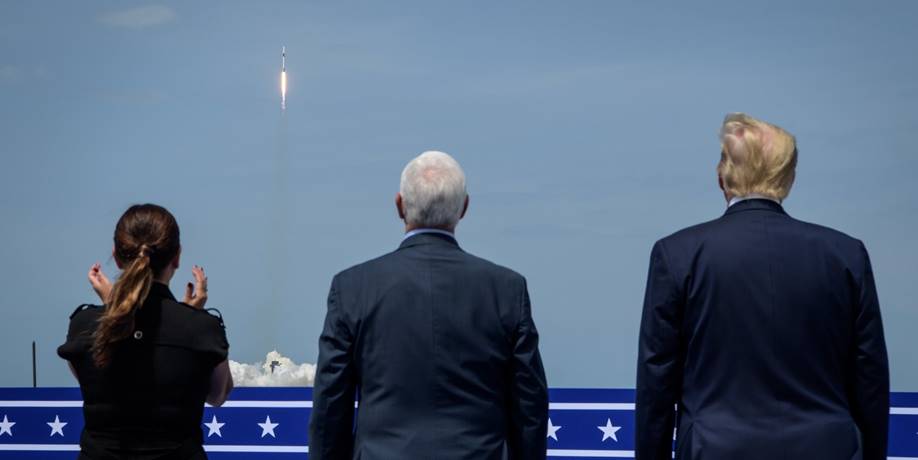 SpaceX controlled today's launch from the historic Kennedy Space Center Launch Control Center Firing Room 4, which the company is now leasing as its primary launch control center. The Launch Control Center has previously supported the historic Apollo, Skylab, ASTP and Space Shuttle programs and is located adjacent to the cavernous Vehicle Assembly Building. Once launched, Crew Dragon is controlled by the SpaceX Mission Control Center in Hawthorne, California in association with International Space Station (ISS) Mission Control Center at the Johnson Space Center in Houston, Texas. Crew Dragon is scheduled to autonomously dock with ISS at 10:29 a.m. EDT Sunday, May 31. This will be the first manned spacecraft to autonomously dock with ISS, but the astronauts aboard will be able to take over the docking procedures should a problem develop. Crew Dragon will be berthed at the forward port of the ISS Harmony Module. It has not yet been determined how long astronauts Behnken and Hurley will remain aboard ISS, they could be there as long as several months if conditions warrant prior to returning to Earth aboard Crew Dragon with a splashdown on the Atlantic Ocean. 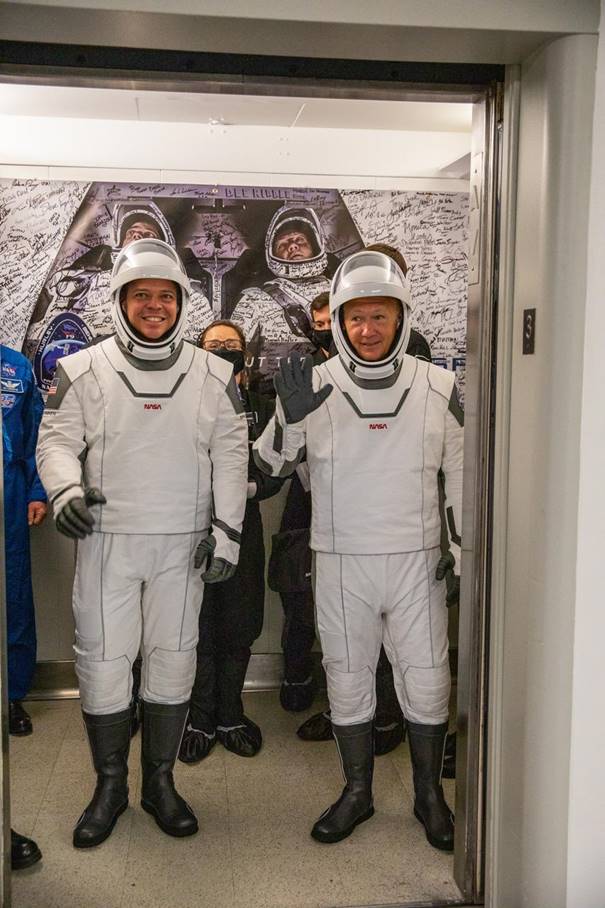 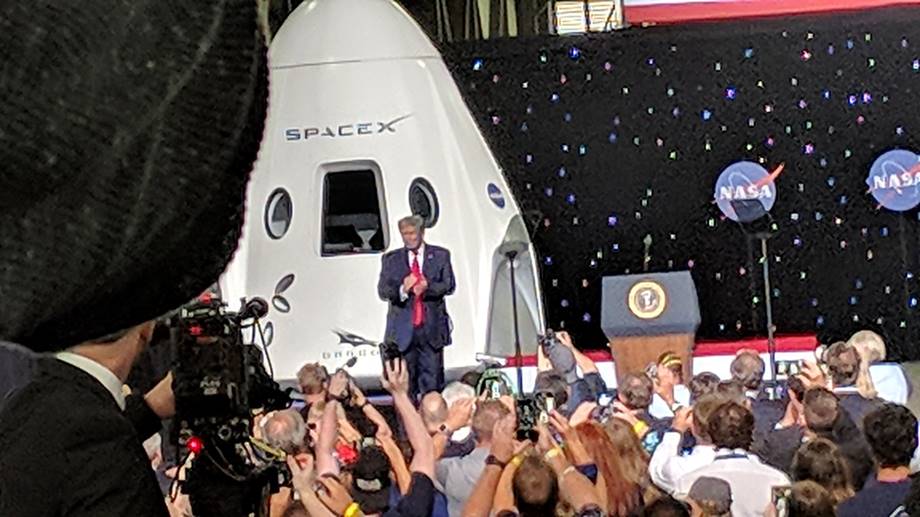 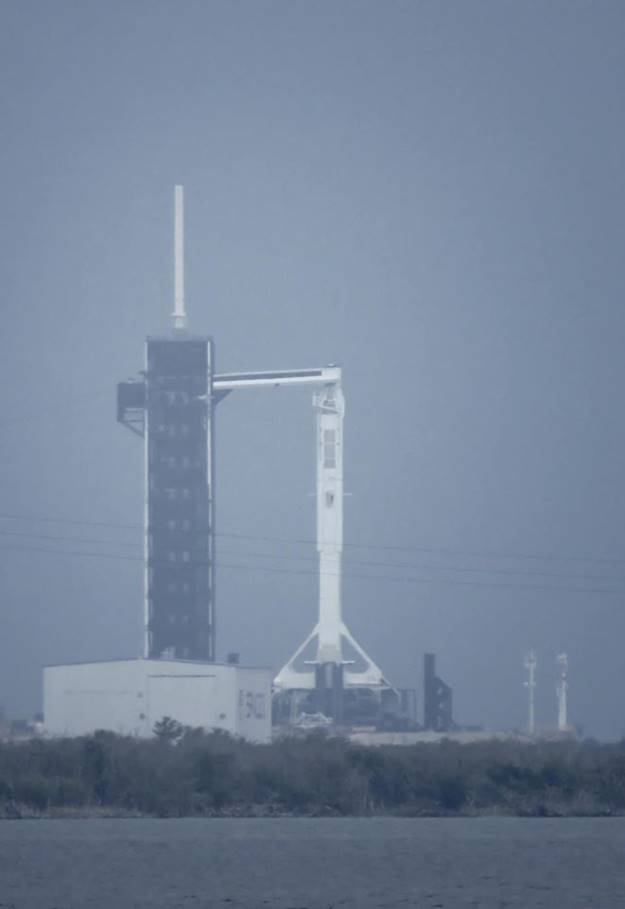 Today's SpaceX Falcon 9 Crew Dragon Demo-2 launch from Launch Pad 39A at the Kennedy Space Center has been scrubbed. Bad weather throughout the day had improved with only one weather constraint remaining red at launch time, that of unacceptable field mil readings, an indication of electrical activity on the ground and in the atmosphere. Those measurements were trending favorably in the minutes prior to launch, but more time was needed to evaluate them than was possible with only an instantaneous launch window available at 4:33 p.m. EDT. Launch was officially scrubbed at T-minus 16 minutes, 54 seconds. The next launch opportunity will be on Saturday, May 30 at 3:22 p.m. EDT. The SpaceX Crew Dragon spacecraft will be carrying astronauts Doug Hurley and Bob Behnken to the International Space Station in the last test flight before regularly scheduled manned flights can begin. This will be the first manned launch from U.S. soil since the retirement of the Space Shuttle program in July, 2011. 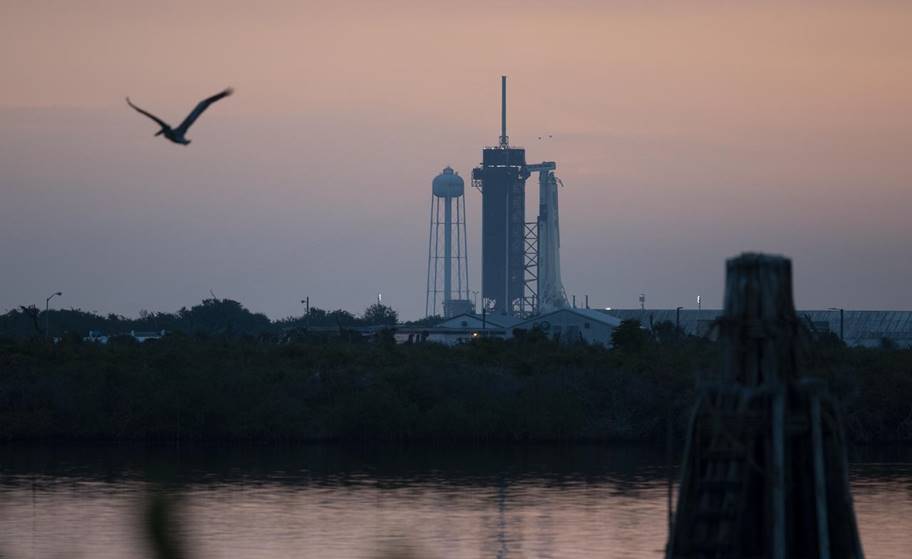 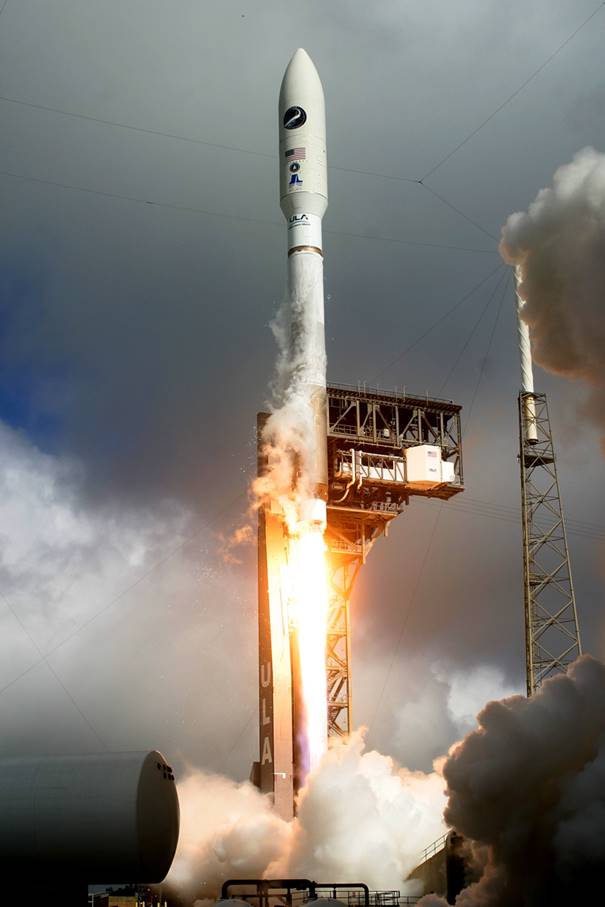 A United Launch Alliance Atlas V rocket successfully launched the USSF-7/OTV-6 payload from Launch Pad 41 on Cape Canaveral Air Force Station at 9:14 a.m. EDT today. Launch was delayed one day due to bad weather. The rocket launched today was in the Atlas V 501 configuration, featuring a five-meter payload fairing, no solid rocket boosters and a single-engine Centaur second stage. Today's launch was dedicated to front-line responders and those affected by the Covid-19 pandemic. United Launch Alliance Vice President of Government and Commercial Programs Gary Wentz explained, "We are honored to partner with the U.S. Space Force and Air Force to recognize healthcare workers, first responders and other essential personnel affected by the Covid-19 pandemic". 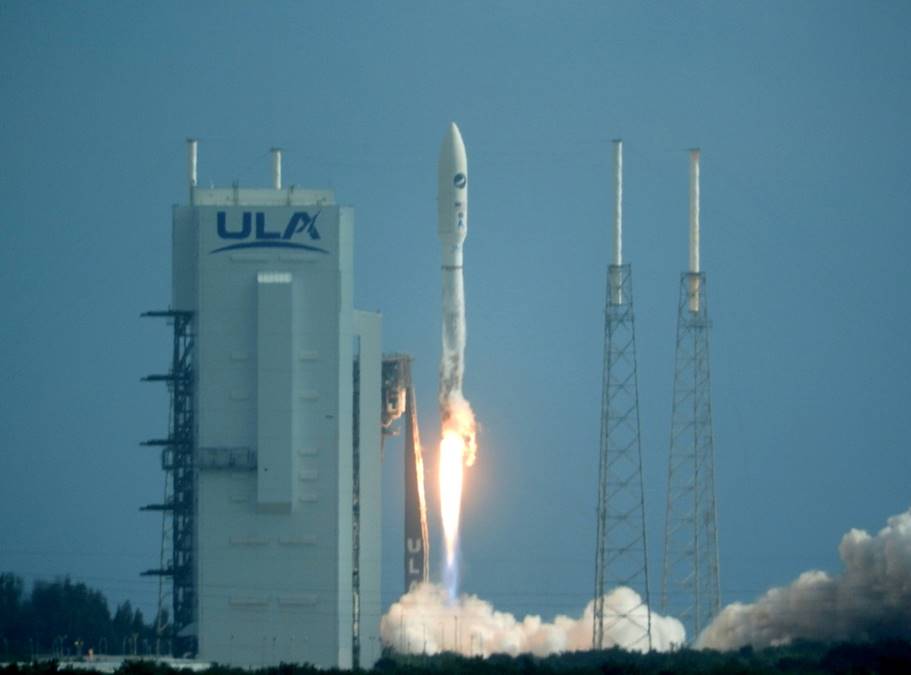 USSF-7 (United States Space Force-7)/OTV-6 is comprised of an X-37B spaceplane, for a series of test flights designated as an Orbiter Test Vehicle (OTV). This is the first X-37B OTV to employ a service module to host experiments. The service module is attached to the aft end of the spacecraft. In addition to on-board experiments, both classified and unclassified, a small satellite named FalconSat-8 will be deployed. The satellite was developed by the U.S. Air Force Academy and sponsored by the Air Force Research Laboratory and will conduct a series of experiments while in orbit. This OTV mission also contains two NASA experiments, one to test the effects of space on various materials and the other to evaluate the effect of space on seeds which may be used to grow food for long duration space flights. Yet another experiment, sponsored by the Naval Research Laboratory, will test a method of using solar energy to create radio frequencies that can be transmitted to the ground. 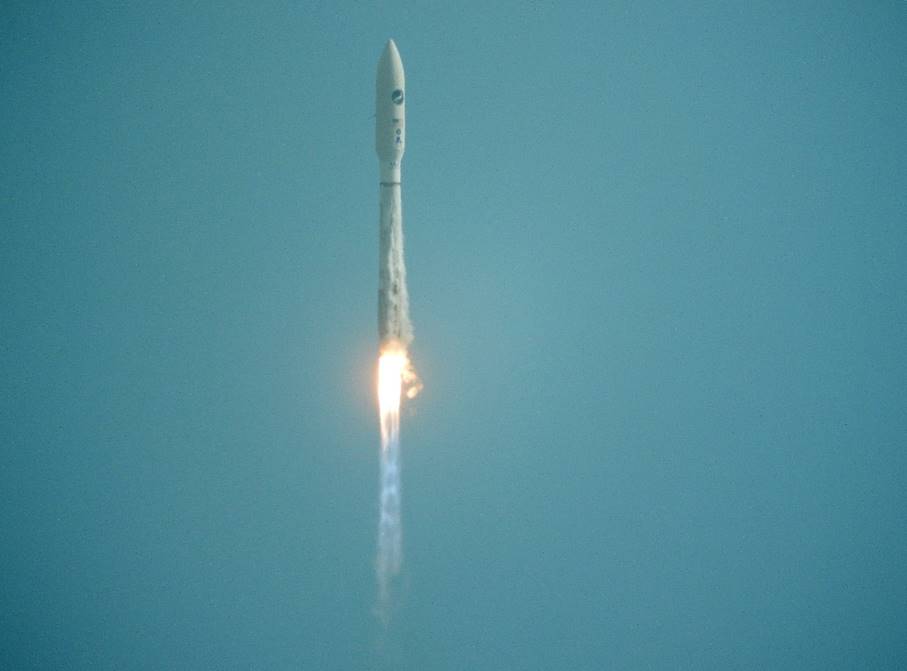 The X-37B OTV itself began its life as the NASA X-37 program in 1999, but subsequently transferred to the U.S. Department of Defense in 2004. The X-37B looks very much like a scaled down version of the Space Shuttle, wholly appropriate as the spaceplane has its roots in the Space Shuttle program and shares many of its unique flight characteristics. The vehicle, about one-fourth the size of a Space Shuttle, currently uses two former Space Shuttle Orbiter Processing Facilities at the Kennedy Space Center for launch preparations and lands at the former Space Shuttle Landing Facility. Most of the elements and purposes of the X-37B OTV remain secret, but the Air Force says it is "an experimental test program to demonstrate technologies for a reliable, reusable, uncrewed space test platform for the U.S. Air Force". The X-37B OTV has a length of 29 feet, 3 inches, a wingspan of 14 feet, 11 inches, a height of 9 feet, 6 inches and has a payload bay measuring 7 feet by 4 feet. The spaceplane weighs about 11,000 pounds at launch. 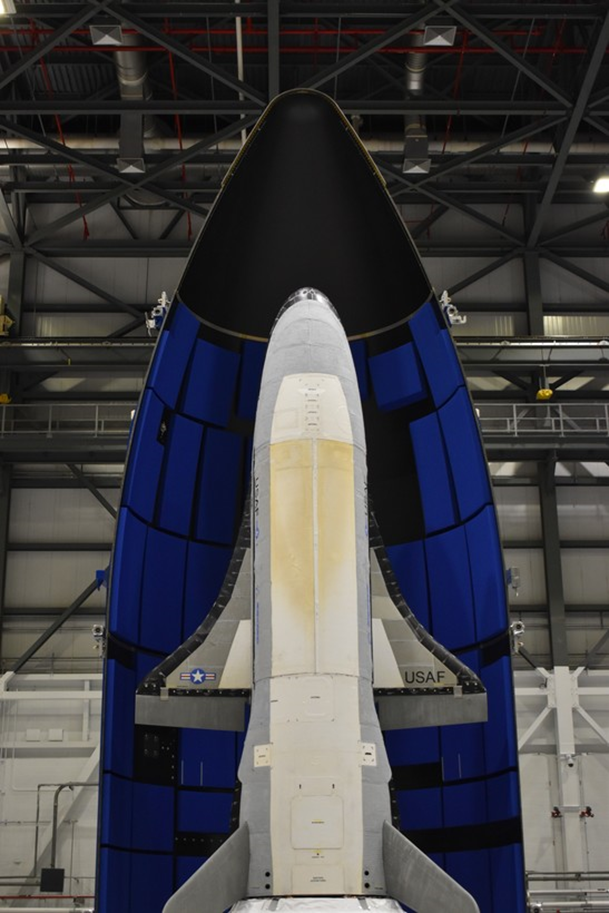 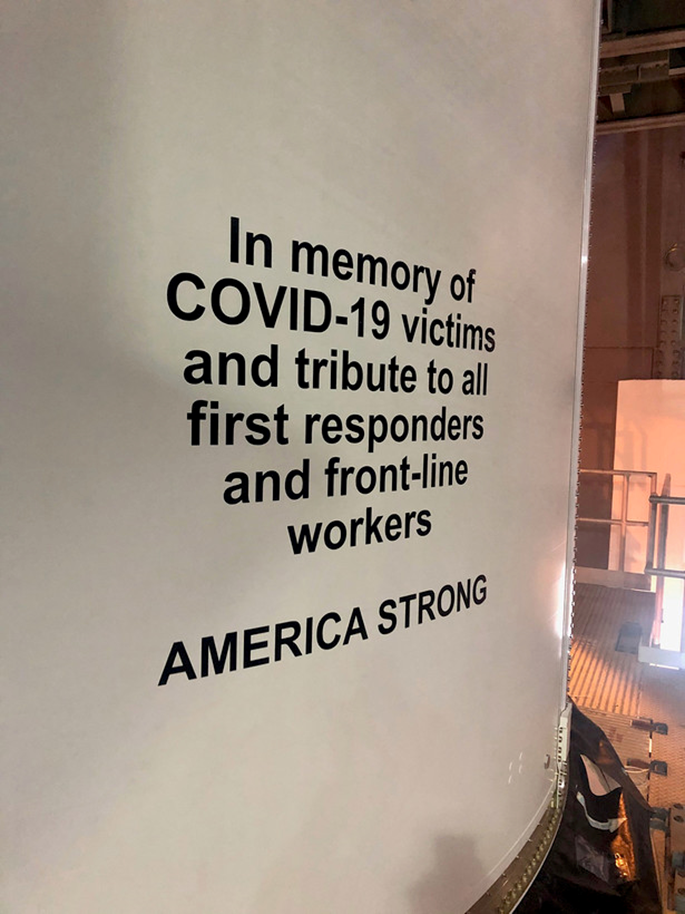 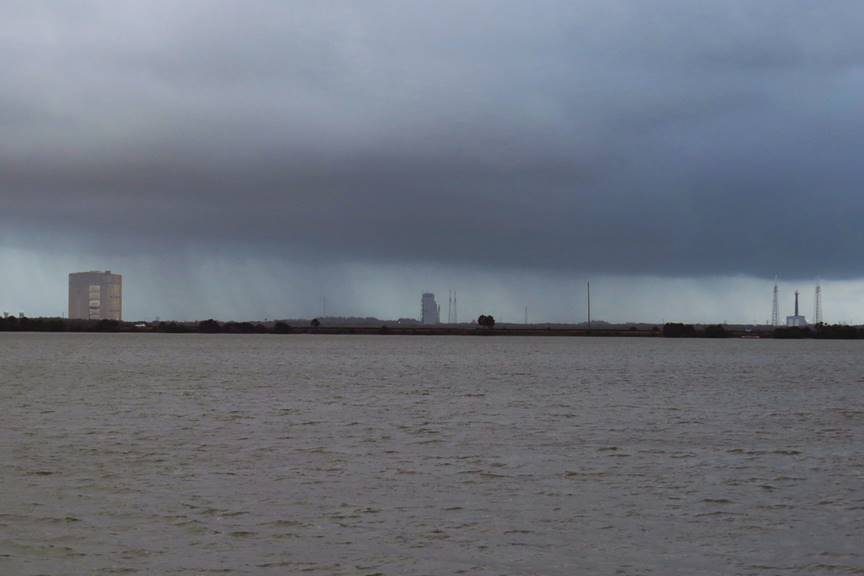 Today's launch of a United Launch Alliance Atlas V rocket from Launch Pad 41 on Cape Canaveral Air Force Station was scrubbed due to bad weather. Thick cumulus clouds and high winds at the Cape plagued the launch all morning and did not improve during the two launch windows available for this flight. There was a 10-minute launch window from 8:24 a.m. to 8:34 a.m. EDT and a second 10-minute launch window from 10:13 a.m. to 10:23 a.m. EDT. Although the countdown progressed to T-minus 60 seconds at the end of the second launch window, violations of the cumulus cloud rule and high winds rule could not be waived and the launch was officially scrubbed at that time. Launch has been rescheduled for 9:14 a.m. EDT on May 17, 2020 and weather is forecast to be vastly improved, with an official 70% chance of acceptable conditions. The rocket will carry an X-37B "Orbital Test Vehicle" (OTV) on the sixth OTV mission, designated OTV-6, as well as experiments in the USSF-7 (United States Space Force-7) payloads into space. The launch is dedicated to those at the front lines as well as the victims of the Covid-19 pandemic. 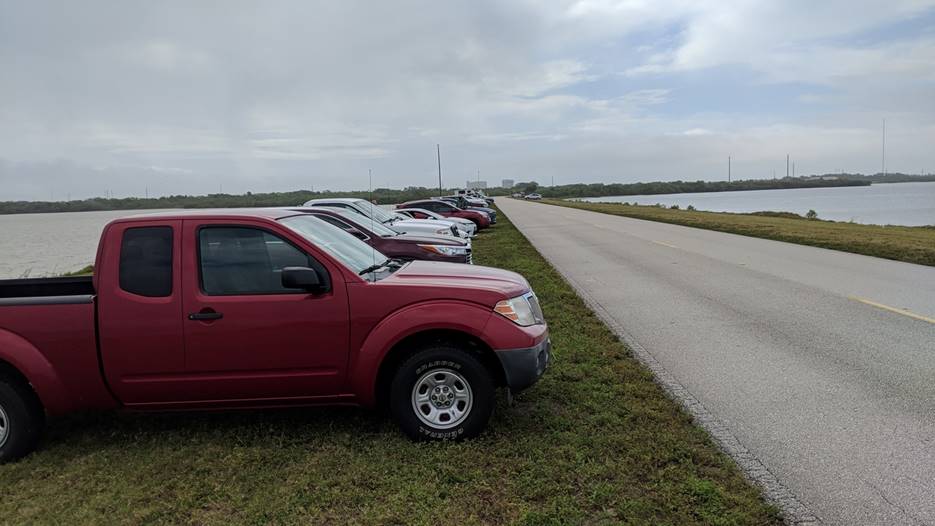