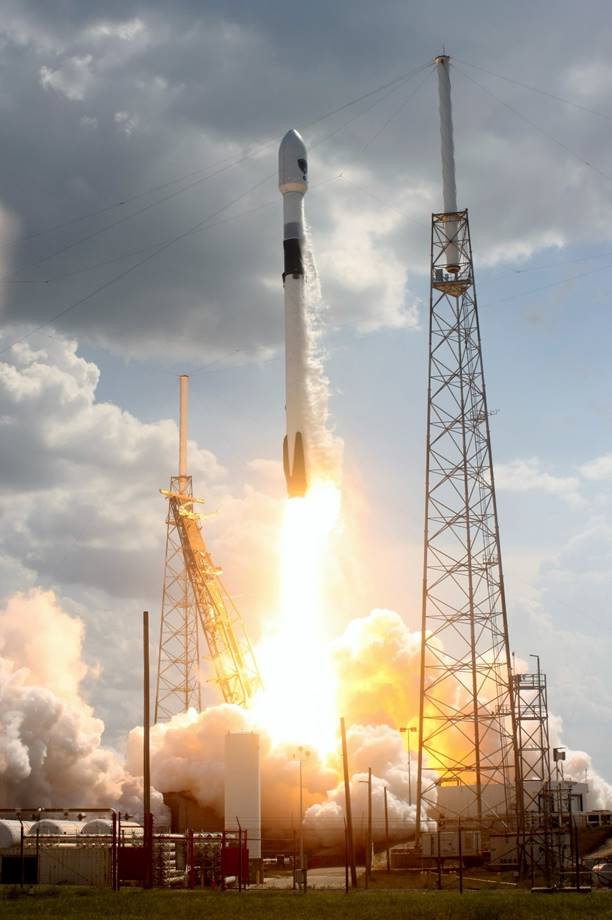 A SpaceX Falcon 9 rocket successfully launched the GPS III-SV03 satellite at 4:10 p.m. EDT today from Launch Pad 40 on Cape Canaveral Air Force Station. Launch was scheduled for 3:55 p.m. EDT but was delayed about 15 minutes to the end of the launch window to allow monitoring of lightning in the launch site area and to allow last minute measurements of weather balloon data regarding high altitude winds to be processed. The first stage booster employed today was successfully recovered with a landing on the "Just Read the Instructions" drone ship positioned on the Atlantic Ocean about 400 miles northeast of Cape Canaveral. The GPS III-SV03 satellite was deployed about 90 minutes after launch. 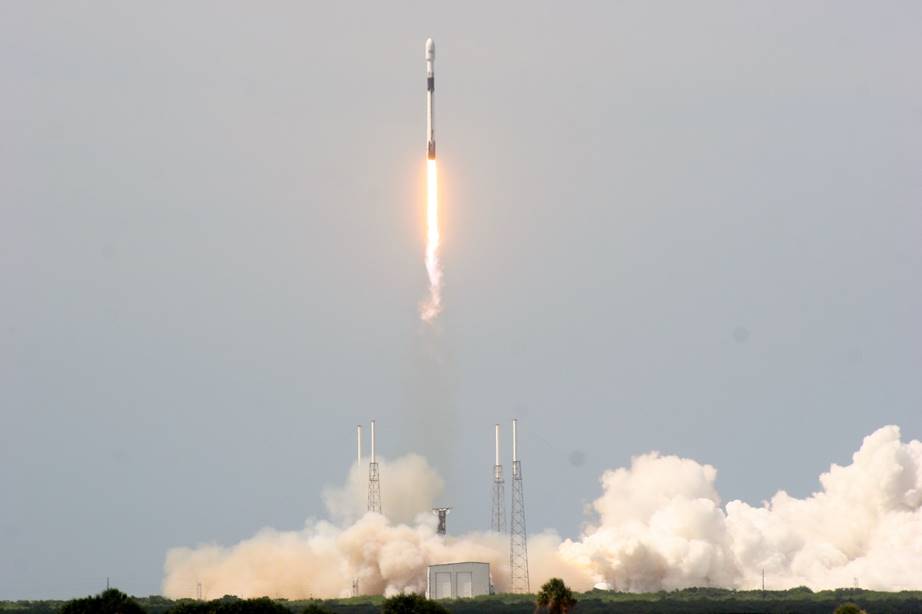 GPS III-SV03 (Global Positioning System III-Space Vehicle 03) is the third in a planned constellation of ten next generation GPS satellites. The GPS III series of satellites is intended to deliver sustained, reliable GPS capabilities to America's warfighters, U.S. allies and civilian users. GPS provides positioning, navigation and timing service to civilian and military users worldwide, with the goal of fulfilling increasing demands for the GPS system. System improvements introduced with the GPS III series include improved anti-jamming, improved accuracy and improved integrity. The satellites operate on six orbital planes at 55-degrees inclination at an altitude of about 12,000 miles. Design life is 15 years with 12 years mean mission duration. Launch weight of the satellite was about 8,000 pounds. Position accuracy is within 0.63 meters. Prime contractor for GPS III-SV03 is Lockheed Martin. 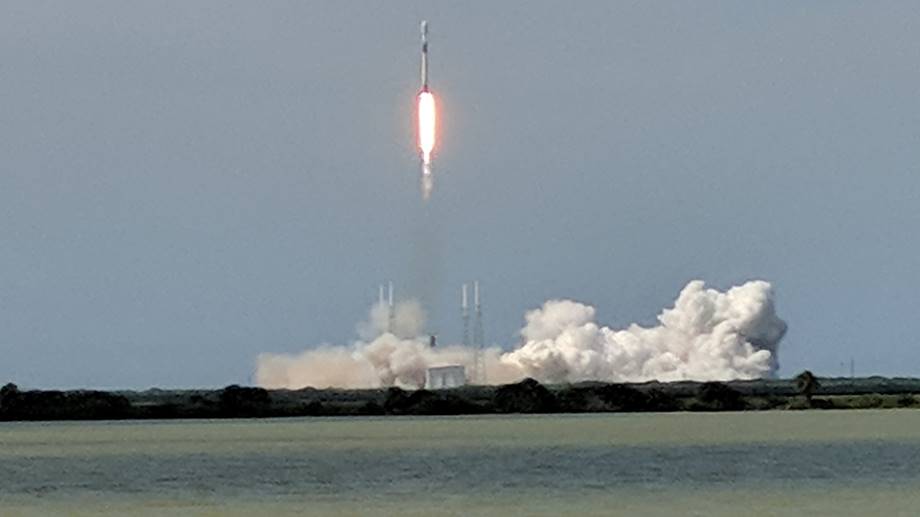 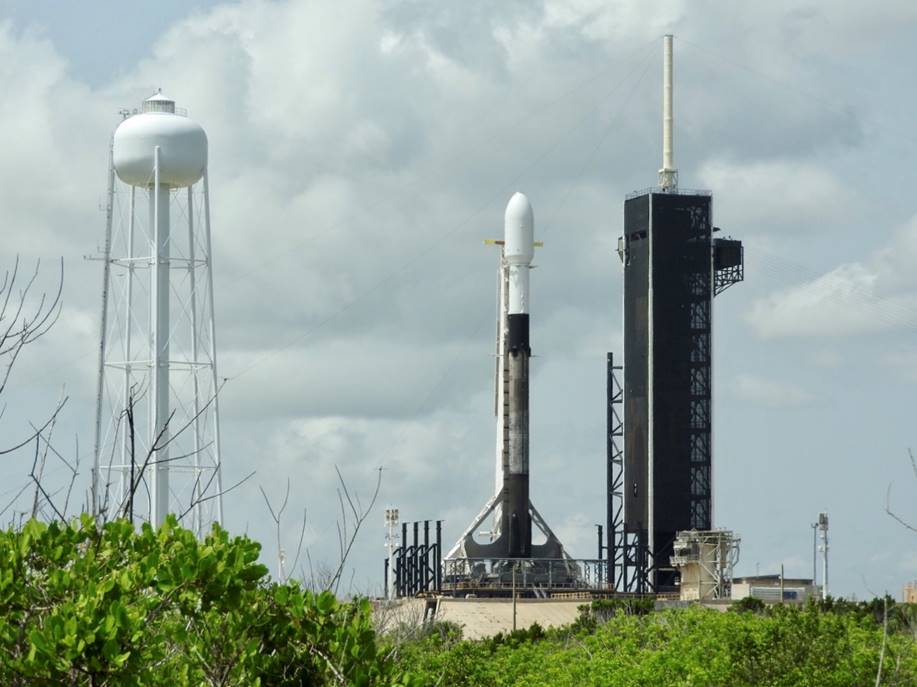 Launch of a SpaceX Falcon 9 rocket carrying 57 Starlink broadband satellites and two Earth-observing rideshare satellites has been scrubbed. The launch had been scheduled for 4:18 p.m. EDT today from Launch Pad 39A at the Kennedy Space Center. About three hours before launch, the countdown was halted. SpaceX said that more time was needed to conduct pre-launch checks and preparations. The company has not yet said when the launch will be rescheduled, but published reports say that the launch could come as early as Sunday, June 28. SpaceX has another Falcon 9 launch scheduled for Tuesday, June 30 from Launch Pad 40 on Cape Canaveral Air Force Station. That rocket will be carrying a Global Positioning System satellite into space, and that launch will take priority of there is a conflict with range scheduling. The Space Force has reportedly said that the Eastern Range infrastructure can support two launches 24 hours apart if necessary. 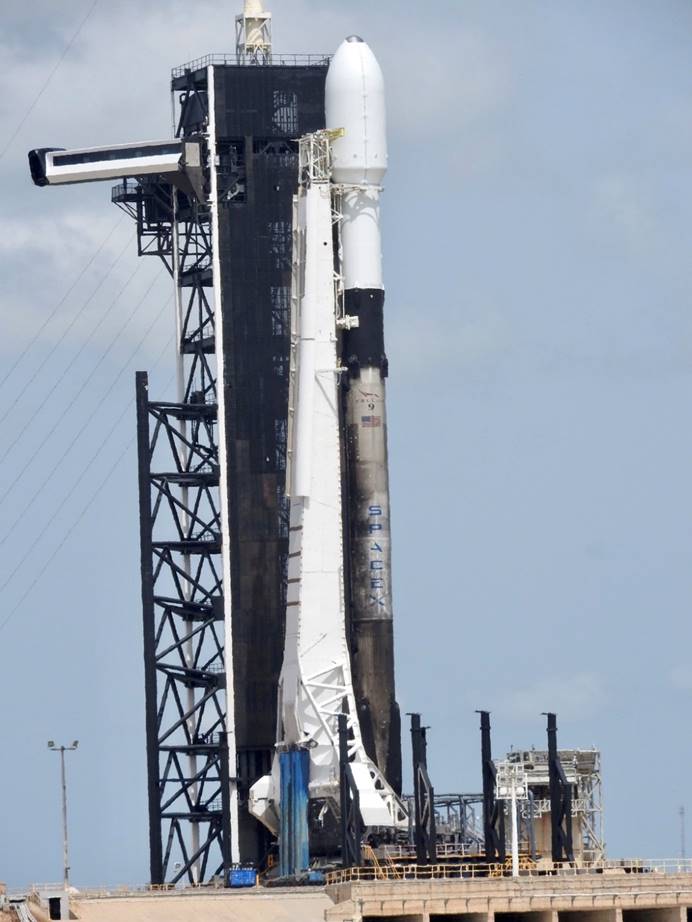 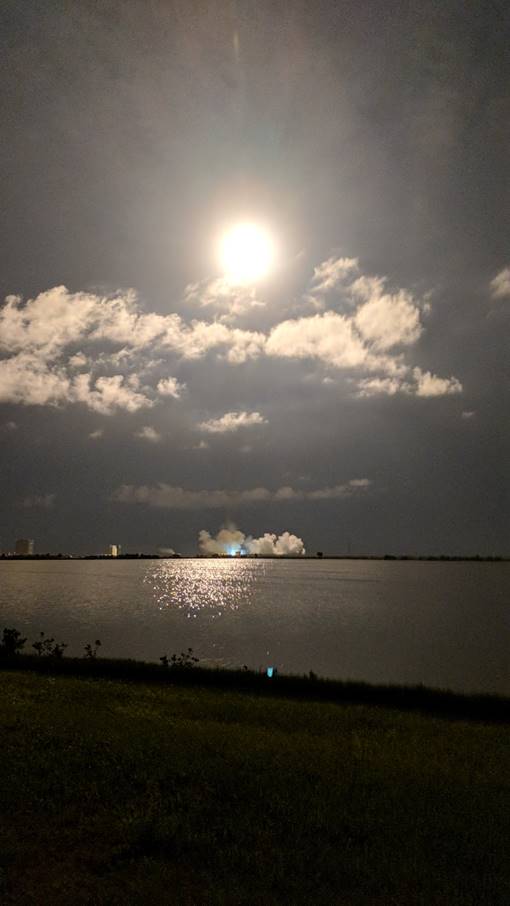 A SpaceX Falcon 9 rocket successfully launched 58 Starlink broadband satellites and three Skysat rideshares at 5:21 a.m. EDT today from Launch Pad 40 on Cape Canaveral Air Force Station. At ten days, this marked the fastest turnaround at a single launch facility for SpaceX to date, and also the fastest launch turnaround in the history of Launch Complex 40. Launch was originally scheduled for June 12 but was postponed for undisclosed reasons. This was the first time a Falcon 9 was launched without a static test firing of its first stage booster. SpaceX did not cite the reason for this, nor if future launches will also be conducted without a test firing. The first stage booster launched today was being flown for the third time, having previously supported the CRS-19 and CRS-20 missions. It was successfully recovered with a landing on the "Of Course I Still Love You" drone ship positioned on the Atlantic Ocean about 400 miles northeast of Cape Canaveral. In addition, the vessels "Ms. Chief" and "Ms. Tree" attempted to retrieve the Falcon 9 payload fairing halves, but SpaceX has not announced whether or not they were successful. Both payload fairing halves were flown before, one supporting the JCSAT-18/Kacific-1 mission and the other supporting the third Starlink mission. 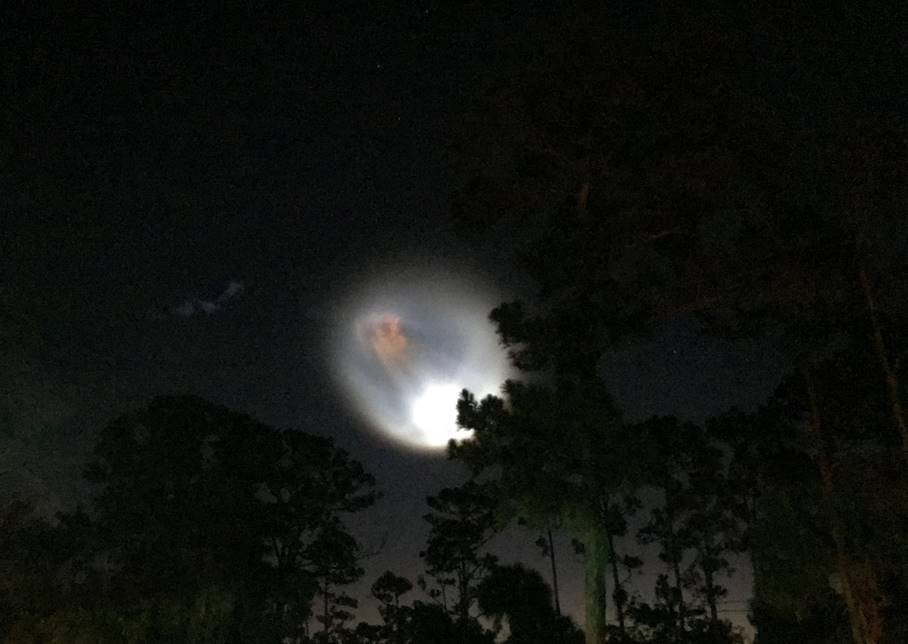 This was the ninth flight of the SpaceX-owned and operated Starlink constellation of broadband Internet service satellites. In a departure from previous Starlink missions, today only 58 Starlink satellites were launched instead of 60, bringing the total number of operational Starlink satellites currently in orbit to 538. Removing two Starlink satellites today allowed room for other payloads to fly in this the first SpaceX Smallsat Rideshare Program launch. Three Earth-observing Skysats owned and operated by a company named Planet were deployed about 12 minutes after launch, with deployment of the Starlink satellites beginning at about 26 minutes after launch. These are a part of the Skysat constellation, numbered 16, 17 and 18 out of a planned 21 satellites total. Each satellite weighs about 242 pounds and are built by Maxar and have a design life of about six years. The three remaining satellites in the constellation are set to fly aboard another Falcon 9 Starlink flight scheduled for July, 2020. SpaceX is selling Rideshare space at a price of about $1 million for a payload weighing a maximum of 440 pounds, providing an affordable cost for many owners of small satellites. As for the SpaceX Starlink space-based broadband Internet service, the company hopes to have it available to users in the northern United States and Canada this year and to the entire world in 2021. Still no word on how much the service will cost once operational. 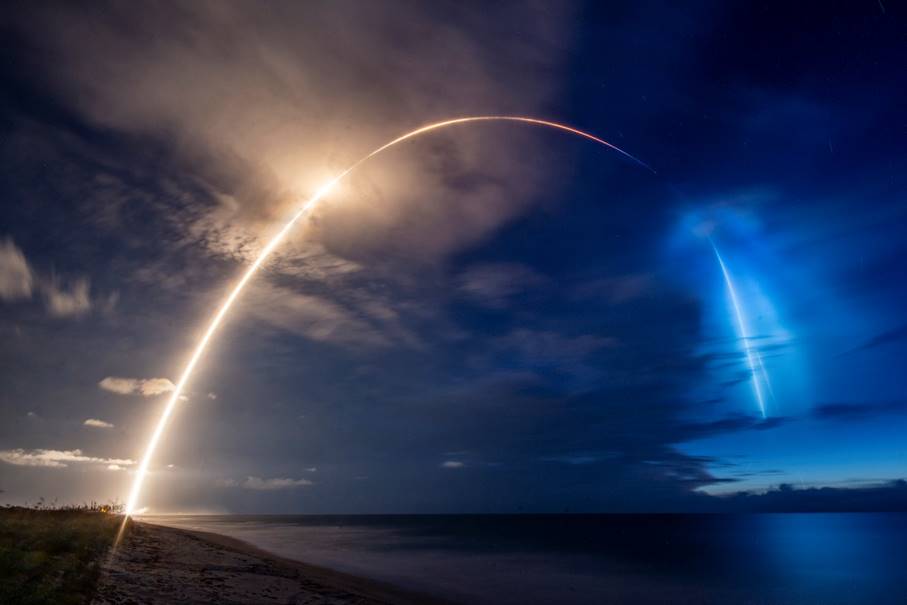 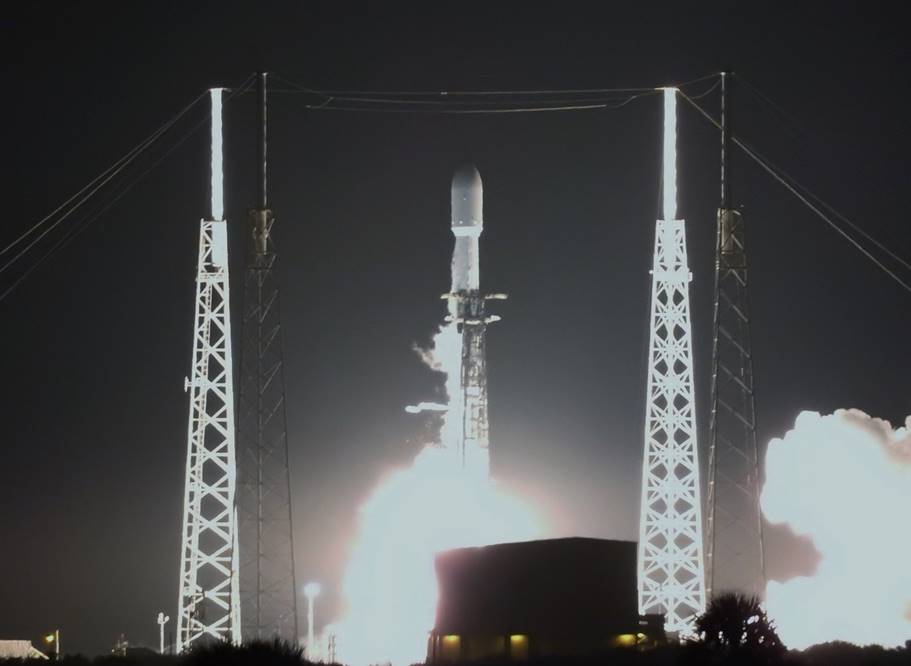 A SpaceX Falcon 9 rocket successfully launched 60 Starlink broadband satellites at 9:25 p.m. EDT today from Launch Pad 40 on Cape Canaveral Air Force Station. Launch was delayed about two weeks due to Tropical Storm Arthur, which whipped up winds and seas on the Atlantic Ocean, preventing a barge-based booster recovery there and allowing SpaceX to focus on their more important launch of two astronauts atop a Falcon 9 on May 30, 2020. The first stage booster employed today was being launched for the fifth time, having been used previously on the Telstar-18 VANTAGE mission in September, 2018, the Iridium-8 mission in January, 2019 and two Starlink missions in May, 2019 and January, 2020. The booster was recovered with a landing on the "Just Read the Instructions" drone ship positioned on the Atlantic Ocean about 400 miles northeast of Cape Canaveral. This was the first time a Falcon 9 first stage booster was recovered for a fifth time. SpaceX would typically employ its "Of Course I Still Love You" drone ship for at-sea booster recoveries but that vessel was occupied returning the booster employed in the May 30, 2020 launch to Port Canaveral. In addition, the "Ms. Chief" and "Ms. Tree" vessels attempted to catch the Falcon 9's two payload fairing halves using huge nets in a high speed Atlantic Ocean pursuit. SpaceX did not immediately announce whether the attempts were successful, but based on their silence on this issue it is likely they were unsuccessful. 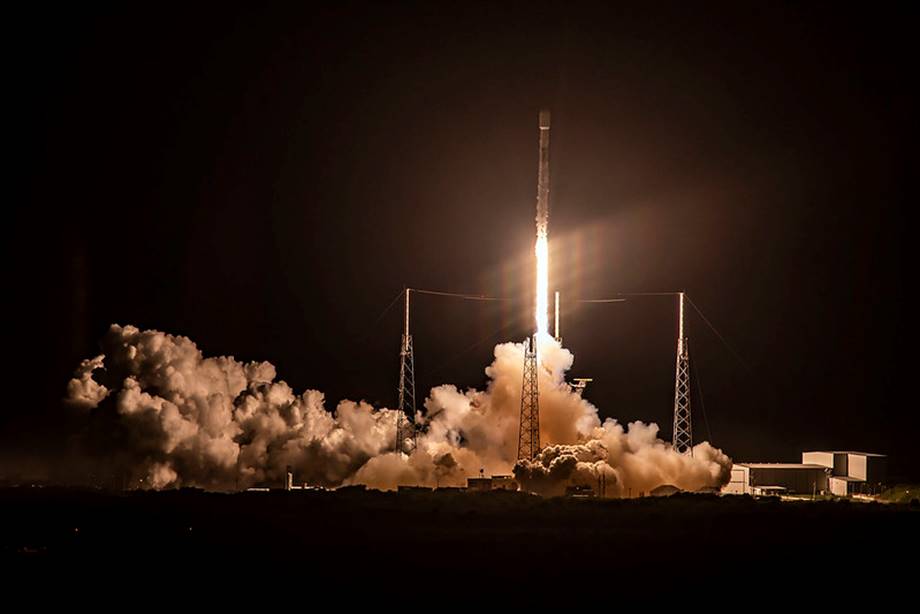 The 60 Starlink satellites were successfully deployed in an elliptical orbit about 15 minutes after launch. After checkouts, these satellites will raise their temporary orbits to a permanent one about 550 kilometers above Earth. On this mission, the Starlink satellites were the first to employ a deployable visor to block sunlight from hitting the brightest spots on the spacecraft. This is a step at alleviating concerns from astronomers that the large number of satellites will adversely affect astronomical observations from Earth. With a planned constellation of up to 12,000 satellites ultimately deployed, SpaceX is treating this concern very seriously. The Starlink constellation, now at a total of 480 satellites strong after this the eight launch of 60 satellites, is designed to provide space-based Internet access to underserved areas or for those seeking an alternative to traditional Internet service providers. Owned and operated by SpaceX, the Internet service may be available to users in the northern United States and Canada later this year, and to the whole world some time in 2021. Details of exactly what sort of receiving equipment will be needed to receive the service and how much the service will cost have not yet been released. SpaceX hopes to launch two more Starlink missions from Cape Canaveral this month. 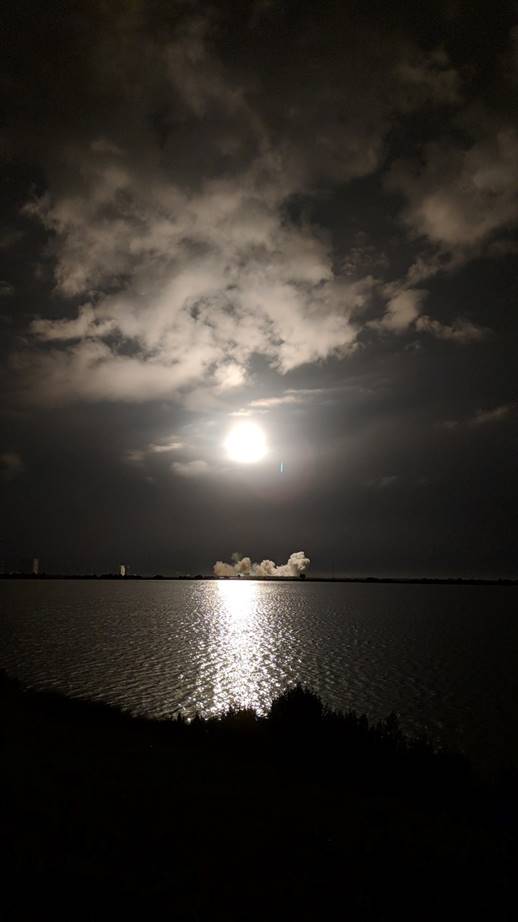