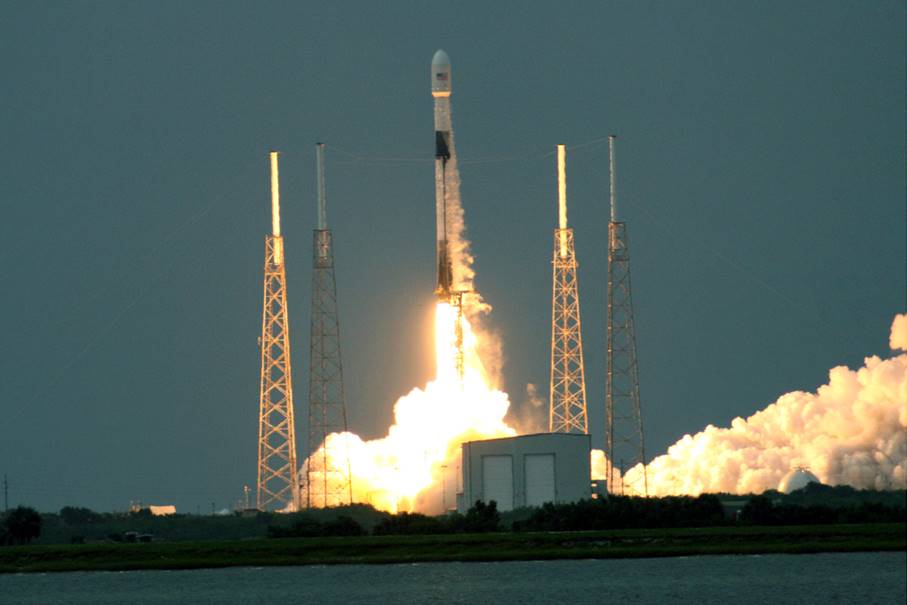 A SpaceX Falcon 9 rocket successfully launched the SAOCOM-1B satellite for Argentina at 7:19 p.m. EDT today from Launch Pad 40 on Cape Canaveral Air Force Station. The first stage booster employed today was being launched for the fourth time, having previously supported the CRS-19, CRS-20 and ninth Starlink missions. The booster was recovered today with a landing at Landing Zone 1 on Cape Canaveral Air Force Station, with the descending booster producing deafening twin sonic booms heard for miles around. This marked the first SpaceX polar orbit mission from the Cape and the first polar orbit launch from the Cape since 1969. Launches from Cape Canaveral typically launch payloads into an equatorial orbit, but today’s launch, hugging Cape Canaveral and the east coast of Florida in a southerly direction, took the payload into an orbit around the north and south poles. 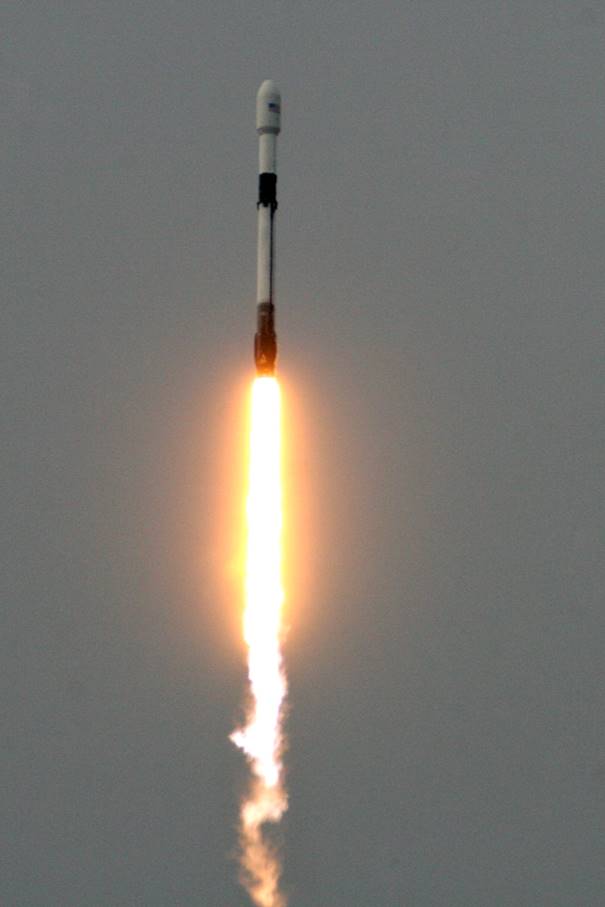 The SAOCOM-1B satellite was deployed about 14 minutes after launch. Two rideshares, designated Tyvak-0172 and GNOMES-1, were deployed about an hour after launch. SAOCOM-1B (Satelite Argentino de Observacion COn Microondas, Spanish for Argentine Microwaves Observation Satellite) is an Earth observation satellite operated by CONAE, Argentina’s space agency. It is designed to make observations to help mitigate and monitor natural disasters. The satellite joins SAOCOM-1A, launched from Vandenberg Air Force Base in California in 2018. Both satellites will work in conjunction with four Italian COSMO-SkyMed satellites to provide frequent information for emergency managers. SAOCOM-1B weighed about 6,600 pounds at launch and has a design life of about five years. 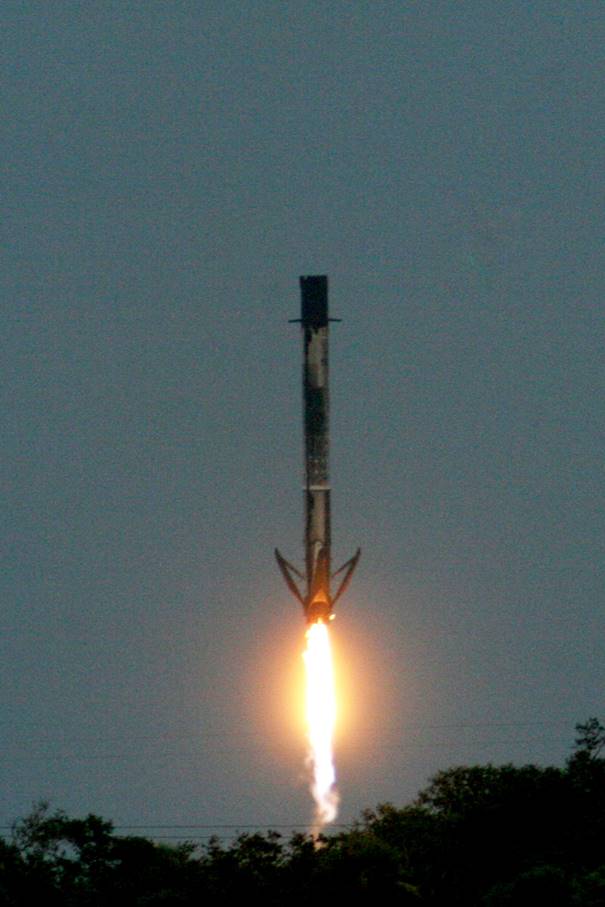 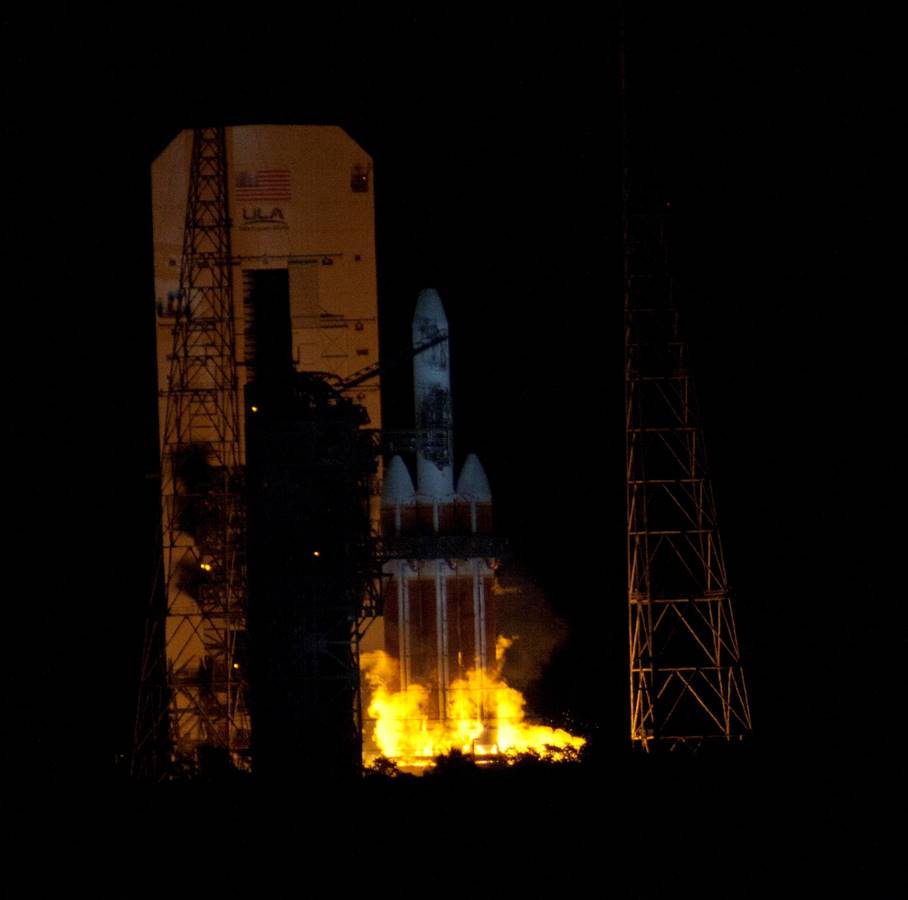 A United Launch Alliance Delta IV Heavy rocket suffered a dramatic launch pad abort today on Launch Pad 37B on Cape Canaveral Air Force Station. Launch had been scheduled for 2:04 a.m. EDT but slipped to 3:28 a.m. EDT due to a thermal issue on the rocket’s first stage. Just three seconds before launch and after the rocket’s first stage booster engines had ignited a launch pad abort was initiated. For a brief moment flames covered the rocket and after the engines shut down it appeared that there was a large fire on the launch pad. However, the rocket was very quickly “safed” and an official scrub was called by launch managers about ten minutes after the abort. In a statement, United Launch Alliance said that the abort was triggered by an issue on the ground and that the launch would be delayed at least seven days, depending on resolution of the issue. It is not clear whether or not the problem could be traced to a ground pneumatics control system, a problem with which caused a scrub which resulted in a 48-hour delay of this launch. The rocket will be carrying the NROL-44 classified payload for the National Reconnaissance Office. 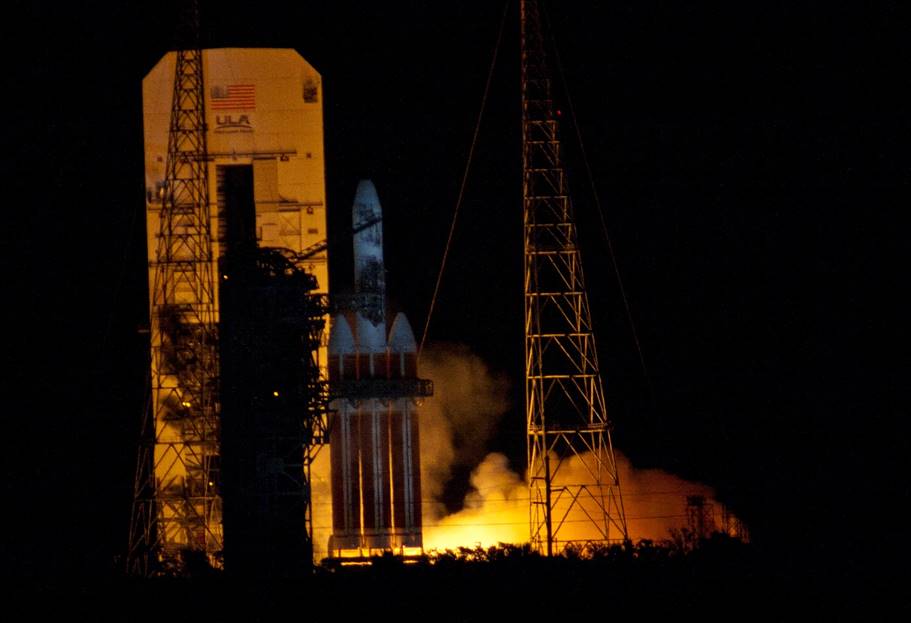 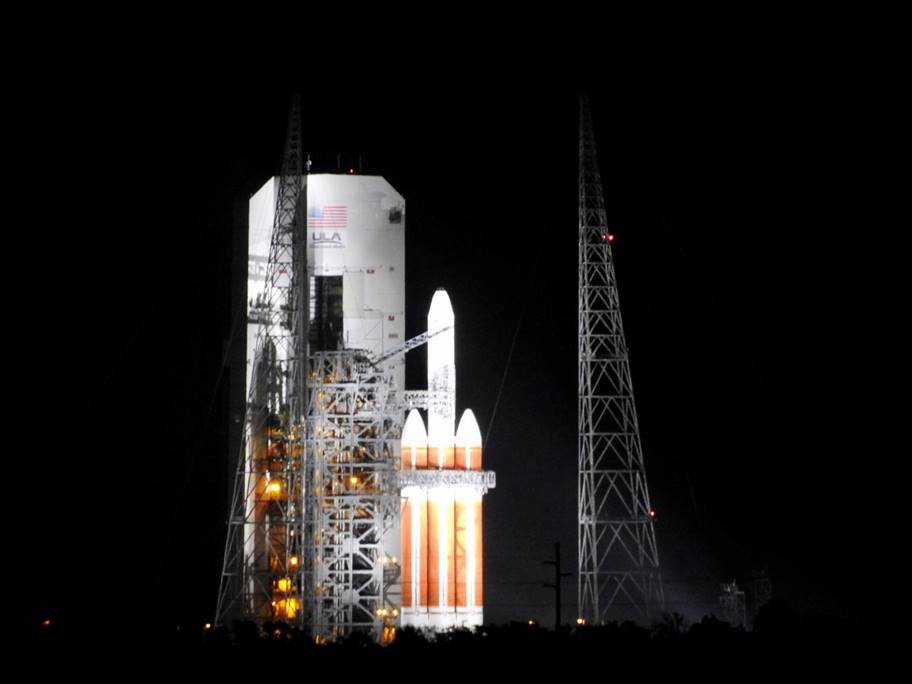 Launch of a United Launch Alliance Delta IV Heavy rocket scheduled for 2:12 a.m. EDT today has been scrubbed. The scrub was officially announced about 45 minutes before launch, although fueling of the rocket was never begun. In a statement, United Launch Alliance said that the scrub was called due to an issue with a "critical ground pneumatics control system" which the launch team needed additional time to evaluate and resolve. Pending resolution of the issue, the launch has been rescheduled for Friday, August 28 at 2:08 a.m. EDT. Launch will be from Launch Pad 37B on Cape Canaveral Air Force Station and the rocket will be carrying the NROL-44 payload, a classified satellite for the National Reconnaissance Office. There is reportedly an 80% chance for acceptable weather for a launch attempt on Friday. 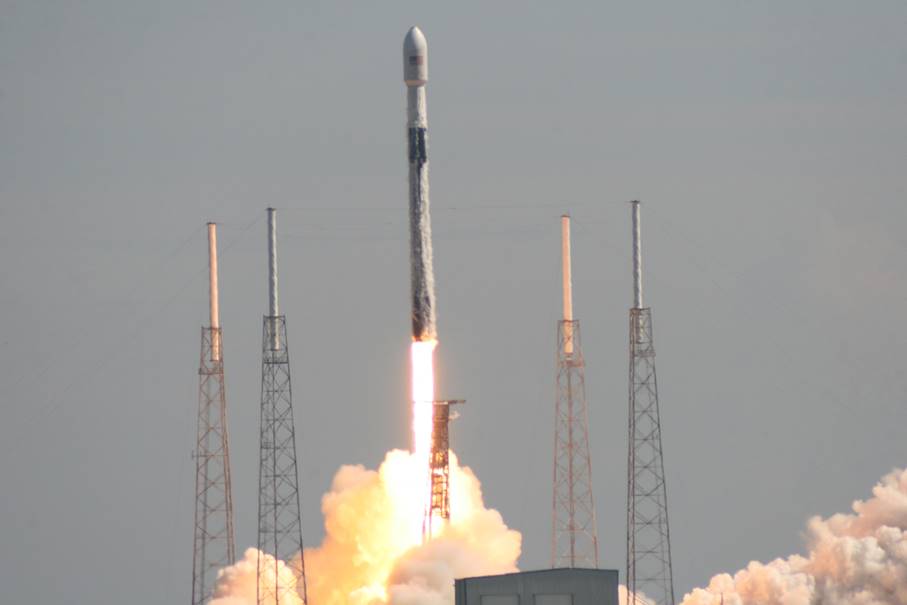 A SpaceX Falcon 9 rocket successfully launched 58 Starlink broadband satellites and three satellite rideshares at 10:31 a.m. EDT today from Launch Pad 40 on Cape Canaveral Air Force Station. Launch occurred on time with no delays. The first stage booster employed today was being flown for a record sixth time, having previously supported the Telstar-18 VANTAGE mission in September, 2018, the Iridium-8 mission in January, 2019 and three Starlink missions in May, 2019, January, 2020 and June, 2020. The booster was successfully recovered today with a landing on the “Of Course I Still Love You” drone ship positioned on the Atlantic Ocean about 400 miles northeast of Cape Canaveral. In addition, one of the two payload fairing halves employed today was successfully caught by one of two specialized recovery vessels while the second half landed in the water and will also be recovered. 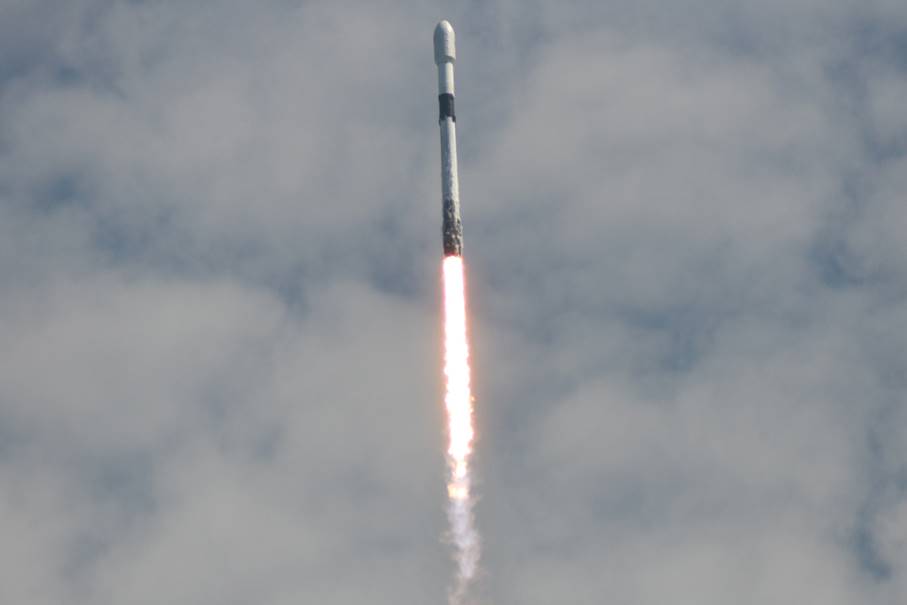 This was the eleventh batch of Starlink satellites launched to date, bringing the total number in orbit to 653. Three SkySat Earth-observing satellites, known as rideshares, were deployed about 12 minutes after launch. These were designated SkySats 19, 20 and 21 and are owned and operated by Planet. The Starlink satellites were deployed about 46 minutes after launch. Starlink is a SpaceX-owned and operated satellite constellation designed to provide space-based Internet service to unserved or underserved areas or to provide an alternative to traditional Internet service providers. Starlink Internet service may be available to the northern United States and Canada later this year and to the entire world in 2021. 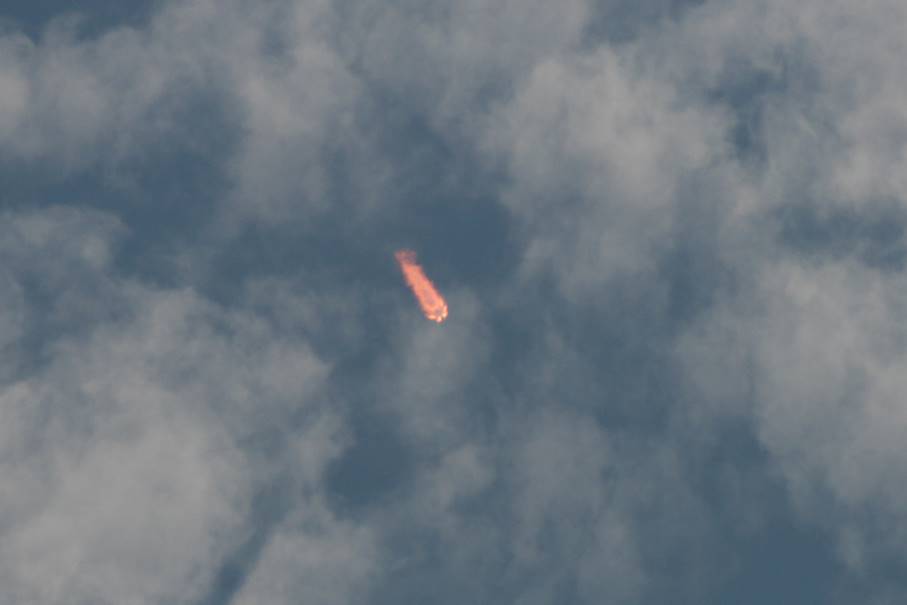 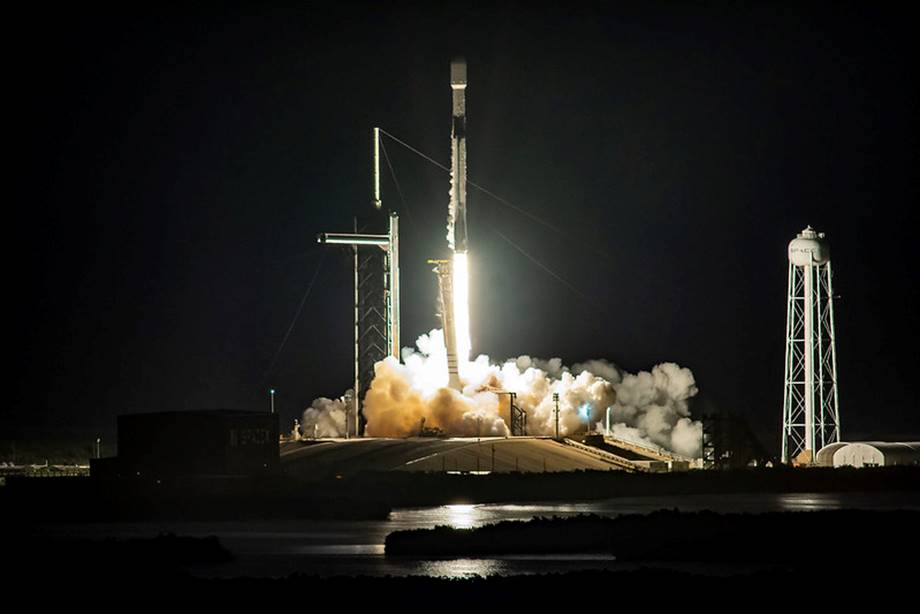 A SpaceX Falcon 9 rocket successfully launched 57 Starlink broadband satellites and two BlackSky global rideshares at 1:12 a.m. EDT today from Launch Pad 39A at the Kennedy Space Center. This was the fourth launch attempt, following scrubs on July 11, 2020 and June 26, 2020 for unspecified technical reasons and a scrub on July 8, 2020 due to bad weather. SpaceX did not confirm what the technical issues were but a launch commentator today said that they were “payload related”. The first stage booster employed today was being flown for the fifth time, having previously supported the Crew Dragon Demo-1, the RADARSAT, fourth and seventh Starlink missions. The booster was successfully recovered with a landing on the “Of Course I Still Love You” drone ship positioned on the Atlantic Ocean about 400 miles northeast of Cape Canaveral. Two BlackSky Global Earth-observing rideshares, designated Global 7 and Global 8, were deployed about an hour after launch. The 57 Starlink broadband satellites were deployed about 90 minutes after launch. Starlink is a SpaceX-owned constellation of satellites intended to provide space-based Internet service. This was the tenth launch of Starlink satellites to date. SpaceX says their Starlink service should be available to users in the northern United States and Canada later this year, and the entire world in 2021. 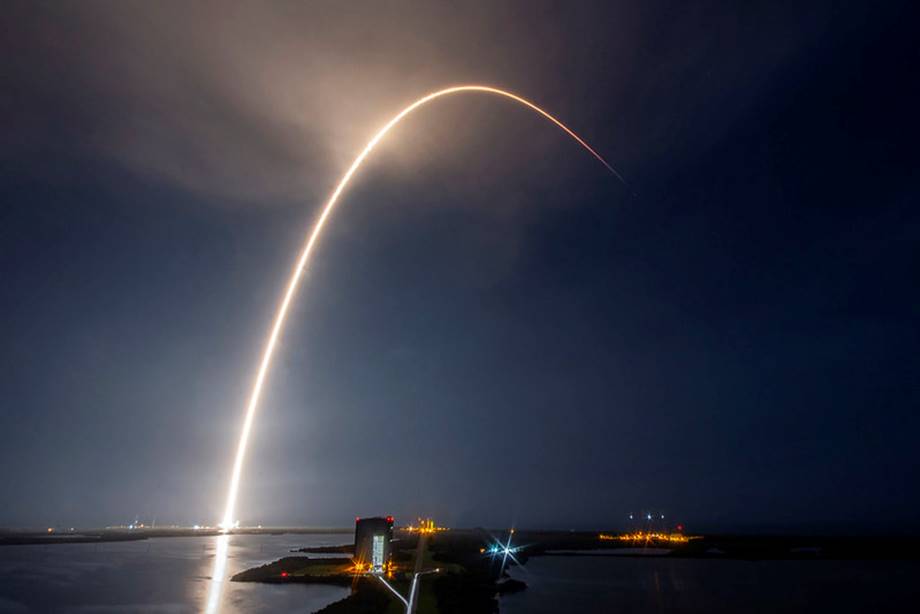 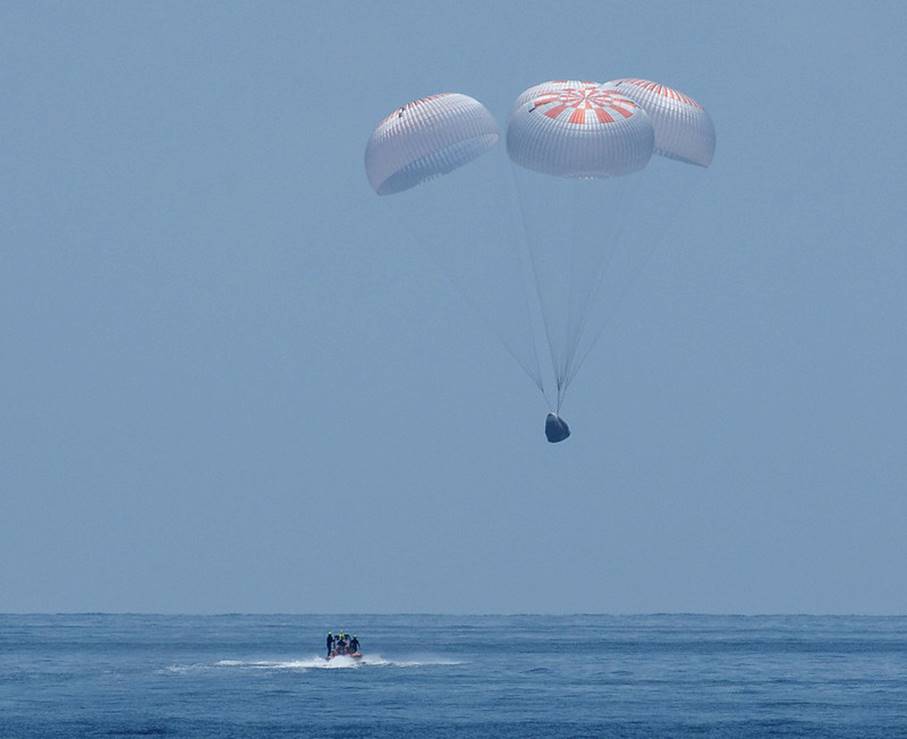 The SpaceX Crew Dragon Demo-2 mission ended with a successful splashdown in the Gulf of Mexico at 2:48 p.m. EDT today. Astronauts Bob Behnken and Doug Hurley returned to Earth in this, the first manned splashdown since the ASTP mission in 1975 and the first splashdown in the Gulf of Mexico, occurring about 34 miles off the coast of Pensacola, Florida. Splashdown had been planned for the Atlantic Ocean near the coast of Cape Canaveral but was relocated due to the presence of Tropical Storm Isaias. The astronauts spent 64 days in space as members of the International Space Station (ISS) Expedition 63 crew.

This marked the first time a commercial spacecraft carried astronauts into space and returned them safely to Earth. The Crew Dragon spacecraft, dubbed Endeavour by the crew, was stabilized, oriented and slowed at high altitude by two drogue parachutes, followed by the deployment of four main parachutes at an altitude of about 18,000 feet. Upon splashdown, the spacecraft was approached by two “fast boats” and ultimately approached by the recovery vessel “Go Navigator” about 30 minutes after splashdown. Endeavour was hoisted aboard the vessel and the astronauts egressed the spacecraft about 60 minutes after splashdown. 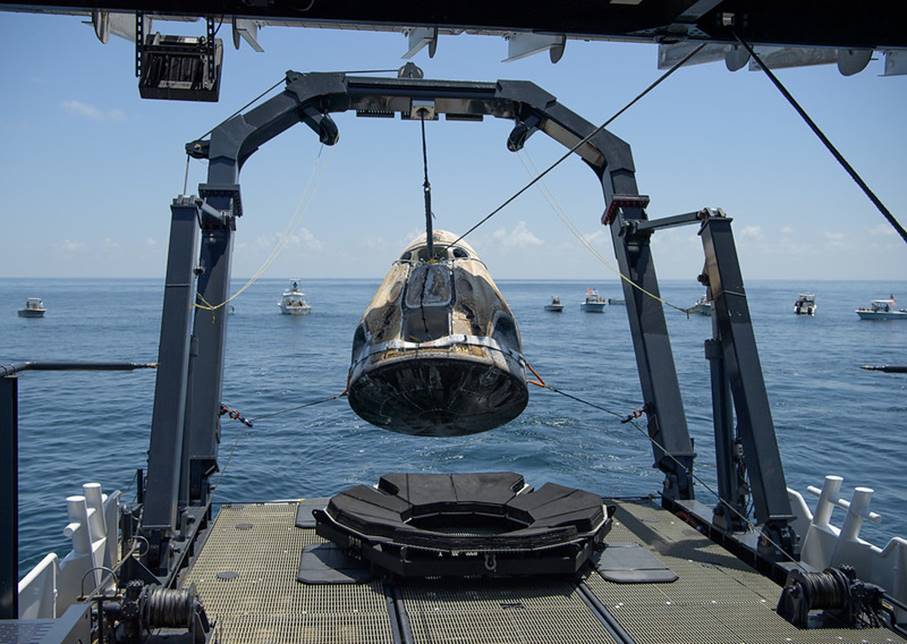 Egress was postponed slightly due to the detection of high levels of nitrogen tetroxide in the air surrounding the spacecraft. The fumes were successfully purged and no one was put in danger. The astronauts were placed in a medical facility aboard the vessel for checkups before being flown to the Naval Air Station Pensacola by helicopter, and ultimately flown back to Houston on a NASA jet aircraft. This successful recovery was another major step in certifying Crew Dragon for operational manned flights to and from ISS, the first of which, designated Crew-1, could occur as early as late September, 2020. 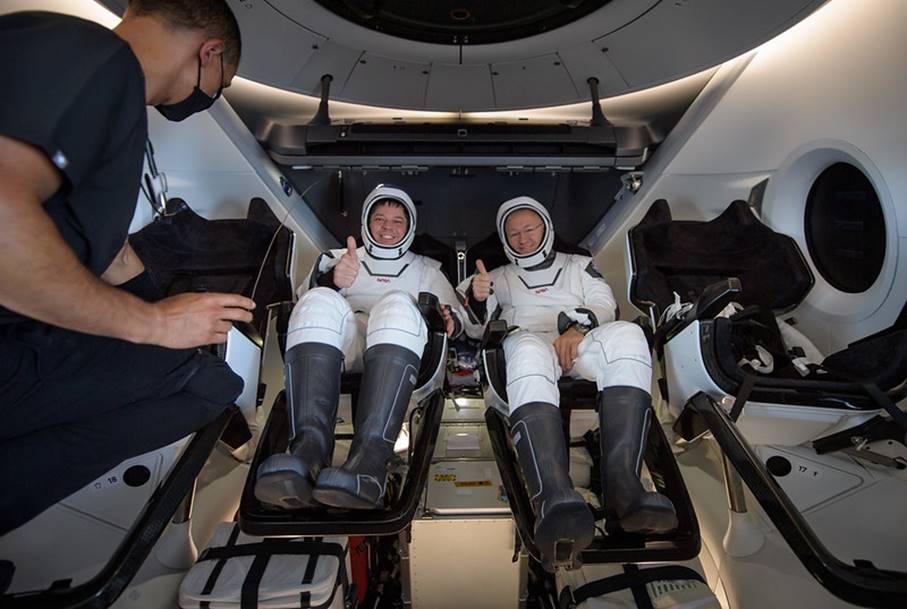